Where did the backstop come from? 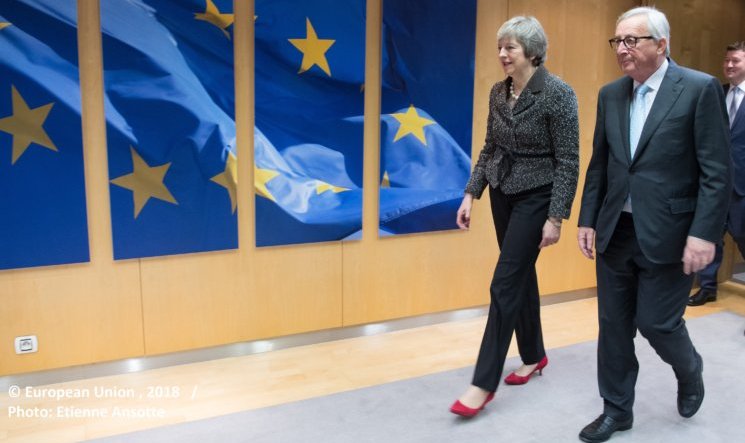 17 January 2017. On this day, at Lancaster House, the Irish backstop was born. Not that we realised it at the time. It was the Prime Minister’s first major speech on Brexit. She mentioned Ireland only in a passing reference to the Common Travel Area.

Northern Ireland was only discussed in the context of the other devolved institutions. So far, so straightforward, it seemed. Not so.

The speech was an exercise in marking red lines. And the Prime Minister went to town. By baldly asserting her desire to leave the single market and the customs union, she was simultaneously creating the need for a harder border between the North and the Republic, though, of course, this wasn’t acknowledged.

And yet, in just her second week as prime minister, May insisted during a visit to Northern Ireland that ‘nobody wants to return to the borders of the past’. This was a message she reiterated in Dublin in January 2017, two weeks after the Lancaster House speech.

This position was formalised in the Joint Report in December 2017: ‘The United Kingdom also recalls its commitment to the avoidance of a hard border, including any physical infrastructure or related checks and controls.’

So how to square this circle? Thinking in London seemed to suggest that a mixture of technology and positive thinking could provide the answer.

A government position paper from August 2017 argued that ‘waivers from security and safety declarations, and ensuring there is no requirement for product standards checks or intellectual property rights checks at the border’ would do the trick.

However, it failed to explain how checks might be avoided in practice (a trick revisited in the Malthouse proposal). Meanwhile, the Irish government had been on the case for a while.

A paper produced in May 2017 stated that there ‘will need to be a political and not just a technical solution.’

Indeed, what became Paragraph 49 of the December Joint Report—the backstop in embryonic form—was first drawn up by Commission and Irish negotiators in a working paper later in November 2017.

The Irish understanding of the border solution was front and centre. As Tony Connelly remarks, ‘the meaning was clear. In order to avoid a hard border … Northern Ireland, to all intents and purposes, would have to remain in the single market for goods and the customs union.’

For the British government, this was unacceptable. All the more so given that, between Lancaster House and the appearance of the Commission’s proposals, Theresa May had suffered humiliation at the hands of the electorate and been forced to rely on the support of the Democratic Unionist Party (DUP) to form a government.

The latter vehemently objected to any suggestion of anything that implied the creation of an internal border in the UK. While the UK government’s position had always been to ensure there were no physical borders either on the island of Ireland or in the UK, the DUP’s influence led to much more explicit commitments.

As Arlene Foster commented at the time, “Nor separated constitutionally, politically, economically or regulatory [sic] from the rest of the United Kingdom.” The prime minister’s red lines were underlined in DUP blood red.

The first practical attempt to square these circles came when the government began its consideration of two different ideas: a facilitated customs arrangement (FCA) and ‘max fac’, or maximum facilitation. Both attempted to avoid the need for a border in Northern Ireland while allowing the UK to pursue an independent trade policy.

Max fac was inspired by a report produced by Lars Karlsson for the European Parliament in November 2017, involving maximising (hence ‘max’) technical means of monitoring the border, such as reaching an agreement with the EU to allow the exchange of risk data, pre-registering goods vehicles and people, and using mobile inspection units and CCTV.

The eventual FCA included in the Chequers white paper contained elements of max fac, such as use of automation, streamlined procedures and simplified customs declarations.

However, Michel Barnier’s response was pretty unequivocal: ‘The EU cannot—and will not—delegate the application of its customs policy and rules, VAT and excise duty collection to a non-member, who would not be subject to the EU’s governance structures.’

Max fac has undergone a revival in recent weeks, repackaged as the Malthouse Compromise, which contains many of the same features. The main difference is Malthouse contains a ‘Plan B’ if, and most likely when, the max fac-style solutions prove insufficient (more on that below).

But it’s worth remembering why the plan was seen as inadequate in the first place. Karlsson never suggested his proposals would lead to a friction-free border. Indeed, his conclusion is that smart borders can ‘create secure and low-friction borders.’

But low friction is not no friction, which is the mutual aim of both sides. And that’s not to mention the extra £20 billion a year HMRC forecast it would cost businesses.

This is why the backstop—a legal guarantee that whatever happens there will be no hard border in Northern Ireland—is seen as necessary, both by the EU and Theresa May. There are technical solutions and ideas out there, and they can certainly help.

No one could question the logic of making border procedures less intrusive and more efficient. But, as things stand, they simply cannot achieve what is required of them: checks of some kind remain an inevitability.

Which brings us to the Malthouse Compromise. This suggests redesigning the backstop in a way that would be compatible with a future, unfettered UK-EU free trade agreement.

The trouble is that this plan, too, doesn’t even aim to avoid all checks and controls, it just moves them inland from the borderline. So the basic dilemma remains: how do you maintain a completely open border between two legal jurisdictions?

The only solution found to date—after many months of careful negotiation in Brussels, if not in Westminster—is the backstop.

By Anand Menon, director and Matt Bevington, policy researcher at The UK in a Changing Europe. This piece originally appeared in the report ‘Brexit and the backstop: everything you need to know‘.