Where does Germany stand on Ukraine – and Russia? 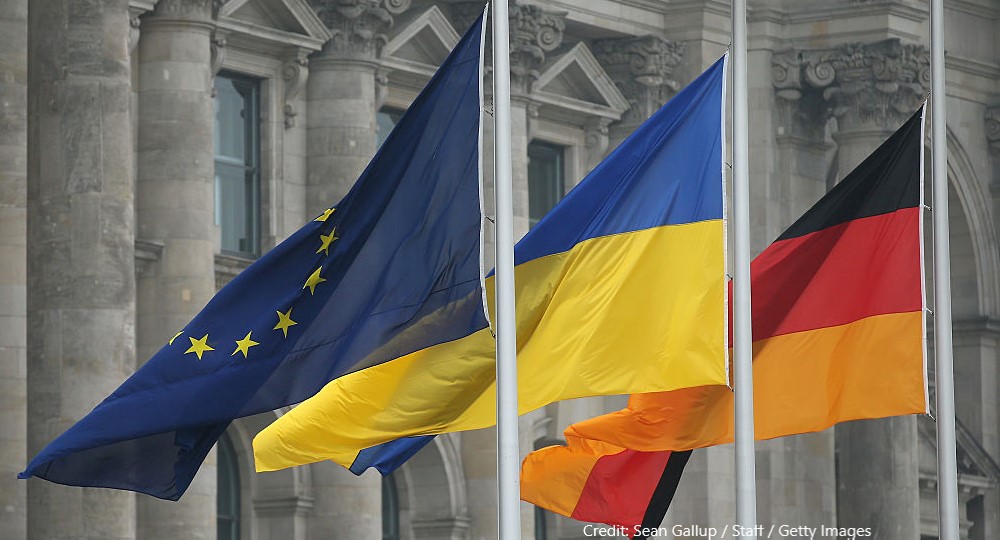 When it comes to Germany and Ukraine, the former currently conveys a pretty strong impression that it is the weakest link amongst the large western states opposing Russian aggression towards Ukraine (and by extension, the threat being felt elsewhere in Europe). The country has declined to join the US and UK in exporting weapons, and has not yet given the green light for aged Howitzer artillery weapons, dating back to the days of East Germany, to be transferred from Estonia to Ukraine.

The UK government declined to seek permission to fly lethal weapons over German airspace, anticipating possible rejection, and Germany’s supply of 5,000 helmets to the country was criticised by the Ukrainian ambassador as a ‘purely symbolic gesture’.

A matter of weeks ago, the leader of the Social Democrats in the Germany’s parliament, Rolf Mützenich, called for ‘an end to mutual threats’ between Russia and the west – an implicit and uncomfortable comparison between Russia’s aggression and those who sought to support Ukraine’s territorial integrity.

So where does this stance come from, and might it shift?

In this issue as in any other, German politics makes little sense without reference to its history. Huge guilt and responsibility is felt, quite rightly, for the loss of over two million Russian lives in the First World War and over ten times that figure (from the former Soviet Union) in the Second.

Germans then faced the division of their country in the post-war period, with memories of the individual hardship that caused still looming large – many Germans have memories of friends or relatives who never saw each other again after the Berlin Wall was built.

Second, German reunification in 1990 could not have been achieved without negotiation with Mikhail Gorbachev – and the latter’s assent to a united Germany’s membership of NATO seemed to show what could be achieved by dialogue. Here, Helmut Kohl’s statecraft, and its outcome, are an important reference point for many on the German centre-right today.

On top of this come other instincts: there is a general predisposition for German diplomats to keep talking and never pull the plug (we might recall Angela Merkel’s persistence in keeping Brexit negotiations going when her French partners’ patience seemed to be at an end).

German politicians have, at least until recently, tried to keep separate Russian gas supplies, including the new Nord Stream 2 pipeline, away from the geopolitical questions to which they are obviously linked. This no doubt reflects German reliance on Russian energy, including for its manufacturing sector, its carbon reduction goals (so that domestic coal power can be wound down), and its shunning of nuclear (in contrast to its French neighbours).

Interestingly, public opinion also remains divided on Russia: for instance, one survey on EU sanctions, prior to the current crisis, showed 68% of west Germans supportive of the measures but only 34% of easterners. These differences are reflected in party politics, with some of those most supportive of the pipeline, and of rapprochement with Russia, hailing from the east, including former SPD leader and Chair of the German Russian forum Matthias Platzeck, the SPD’s popular state premier of Mecklenburg West Pomerania (where the pipeline lands), Manuela Schwesig, and Saxony’s Christian Democrat premier Michael Kretschmer.

They are joined by Stephan Weil, SPD premier in Lower Saxony, home of Volkswagen and with a keen interest in the cost of energy. Former SPD Chancellor Gerhard Schröder is, of course, chairman of the shareholders’ committee of Nord-Stream as well as for the Russian oil company Rosneft, and is a powerful advocate for Russian interests, going so far as to call Vladimir Putin a ‘totally pure democrat’ while still chancellor in 2004.

While Germany’s gentle poise towards Russia seems alien to observers in the UK and the US, it would be wrong only to link it to Schröder’s lobbying or a cynical desire for cheap Russian gas. The weight of historical legacy in dealings with Russia is heavy. Moreover, peace in Europe hardly seems likely if dialogue with Russia ceases.

In a thoughtful interview, SPD foreign policy spokesperson Nils Schmid pointed to enduring principles in his party’s foreign policy, dating back to Willy Brandt: pushing for peace and disarmament, clear support for dialogue, even in difficult circumstances, a comprehensive desire to prevent conflict, while still recognising Germany’s commitment to NATO and the EU, and acting in concert with those partners.

Forging European consensus, not going it alone, is at the heart of German foreign and European policy, as is extreme caution about military interventions: it sees a division of labour in NATO, with the country focusing particularly on diplomatic efforts. Germans add in defence of their record that the country played a key role in negotiating the Minsk agreements to de-escalate conflict in eastern Ukraine, and supported the imposition of EU sanctions on Russia.

Indeed, Green foreign minister Baerbock made this point last week in the German parliament, highlighting financial, diplomatic and even some (soft) military support for Ukraine, and suggesting this reflected a justifiable division of labour amongst NATO members.

The new coalition of SPD, Greens and Liberals is by no means united in its doveish stance. Green Foreign Minister Annalena Baerbock and Economics and Energy Minister Robert have repeatedly used far tougher language, with Habeck calling Nord Stream 2 a ‘geopolitical mistake’.

The opposition centre-right is not of one mind: while former parliamentary foreign affairs committee chair and defeated CDU leadership contender Norbert Röttgen has long pushed for a firmer stance, Bavarian state premier and CSU leader Markus Söder gave an interview calling into question the effectiveness of EU sanctions against Russia, and coming close to agreeing Putin’s demand that NATO membership for Ukraine be ruled out.

Most importantly, there seem to be cracks in the SPD’s stance, with two of the newer generation of foreign policy experts, Nils Schmid and Michael Roth (the latter now chair of the foreign affairs committee in parliament) bringing Nord Stream 2 into the scope of potential sanctions should Russia invade Ukraine. The key figure is Chancellor Olaf Scholz himself: his position in mid-January at last seemed to shift, not ruling out sanctions affecting the pipeline.

So where next? It seems plain that Germany will keep plugging away at diplomacy, supporting attempts at dialogue in the Normandy format (with the US, France and Russia). It also seems plain that exporting lethal weapons (or indeed anything very much of use to the country in defending itself) to Ukraine is a no-go for the government (as well as German public opinion).

But there are signs that the line that energy policy (notably Nord Stream) should be kept separate from foreign policy is increasingly untenable, and any acts of Russian aggression will bring intense pressure from Germany’s eastern neighbours, as well as the US, to whom the country also owes a significant historical debt and wants to act in concert.

By Ed Turner, Reader in Politics at Aston University and Co-Director of the Aston Centre for Europe.  He is acting chair of the International Association for the Study of German Politics.