Who are you calling low skilled? 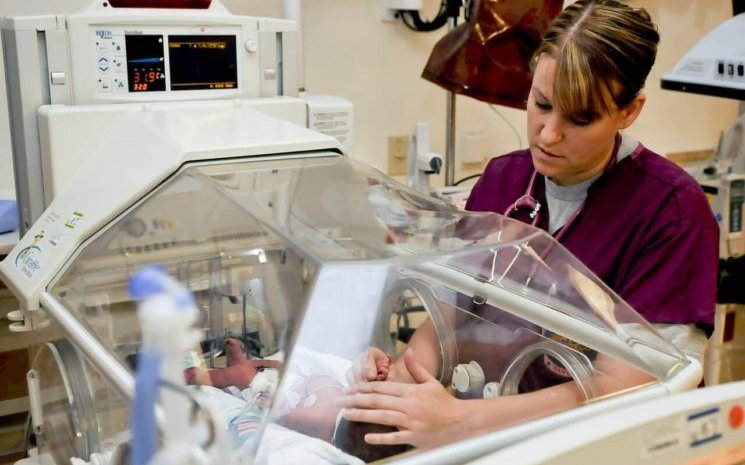 Over the past few months it has gradually sunk in to the government, and to much of the public, that ending free movement of workers, after Brexit, is likely to have significant economic consequences. That is, if we want Brexit to result in a large reduction in immigration then the economic cost will be high; whereas if we want to minimise that cost, we will have to put in place a new immigration system that, while replacing free movement as far as European origin migrants is concerned, still means relatively high levels of immigration on an ongoing basis.

Responding to this, a favourite tactic of those who want to make UK immigration policy much more restrictive post-Brexit is to deny this choice. So, for example, earlier this week Steven Woolfe MEP, writing for “Leave Means Leave”, argued that it would be easy enough to get net migration down to 50,000, simply by a “moratorium on unskilled visas”. Indeed, this would benefit not hurt the economy.

“By ending free movement of people from the EU, we will help the low skilled employment sector….EU citizens should receive the same treatment as non-EU citizens. If we extended this policy to EU citizens once we invoke Article 50, and only offer working visas to skilled workers, this would potentially reduce net EU migration to the UK by more than 100,000 a year.”

Let’s leave aside the fact that Steven’s numbers don’t even come close to adding up (since he’s proposing little change to non-EU migration, there’s no prospect of his system reducing net immigration to 50,000, that is a fall of over 200,000) and move on to Lord Andrew Green of Migration Watch:

“For workers there will have to be a system of work permits similar to that which now applies to non-EU workers. We estimate that a regime of this kind would reduce net migration from the EU by about one hundred thousand a year…Can we get the numbers significantly down without doing serious damages to business? 80% of EU workers who have arrived in the last ten years are in low-skilled, low-paid jobs. Their contribution to our economy is limited. In his final report as chairman of the government’s independent Migration Advisory Committee, Sir David Metcalf reported in June 2016: ‘Low skilled migrants have a neutral impact on UK-born employment rates, fiscal contribution, GDP per head and productivity’.”

So everyone who claims that sharp cuts in EU migration will be economically damaging is wrong: we can simply end “low skilled, low-paid” migration, and we’ll have much lower migration and no economic damage. It’s no secret why the anti-immigration lobby pushes this line – they know that public opinion is much more positive about skilled than unskilled migration.

But this is a con, plain and simple. When Woolfe and Green talk about “unskilled” or “low paid” workers they don’t mean unskilled or low paid workers. They mean workers who would not currently qualify for a Tier 2 visa – or the even more restrictive system that they want. Woolfe sets out his plan thus:

“Working visas will only be granted if the satisfactory amount of points is reached…The points system will take into account education, qualifications and suitability for a job…However, a work visa will only be granted once these other requirements are met…The applicant has a job offer, sponsored by a company and a minimum annual salary of £35,000.”

Even leaving all the other requirements aside, only about one quarter of UK employees earn more than £35,000. Examples of jobs that for which half or more of all employees earn less than £35,000 include physiotherapists, speech therapists, nurses, primary school teachers, most technicians, skilled construction workers, chemists, environmental scientists, social workers, paralegals, electricians, chefs, butchers, bakers, and candlestick makers (OK, there’s no SOC4 code for candlestick maker. But you get the idea). These are the people Steven Woolfe is calling “unskilled” and wants to keep out.

“Whether they are eye surgeons from Bangalore or skilled abattoir workers from Eastern Europe, it is manifestly in our national interest to be as open as possible in attracting the best talent from across the world.”

The obvious question is, if it’s in our national interest to attract “skilled abattoir workers” – who earn nowhere near £35,000 a year – why is Mr Paterson endorsing a system that is precisely designed to keep them out, as well as many others who indeed represent “talent from across the world.” Ignorance or hypocrisy?

With Lord Green it is definitely not ignorance, but what appears a deliberate attempt at misdirection, as the paragraph above shows. It may be approximately true that “80% of EU workers who have arrived in the last ten years are in low-skilled jobs” – but only if by “low-skilled” you mean the type of jobs that the majority of Britons work in, including many or most of the skilled jobs mentioned above. Meanwhile, it is simply untrue to claim that 80% of them work in low-paid jobs, unless by low pay you mean (at least) anybody who’s paid less than the average Brit.

Even more duplicitous is the reference to the Migration Advisory Committee report on “low skilled workers”. Briefly, as Lord Green surely knows, the MAC used a much more restrictive, and much more sensible, definition of “low-skilled”. Under this definition, none of the occupations I describe above would be “low skilled.” Indeed, the MAC found that only about a half of recently arrived EU workers were in “low skilled” jobs; compared to Lord Green’s 80%. Bizarrely, even a (relatively recent) Migration Watch paper only claims that 59% of recent EU migrants are in “low skilled” jobs.

Helpfully, ONS published today a useful summary of what we know about migrant workers in the UK labour market. As this chart shows, most migrants, like most Brits, work in jobs whose skill level is described as “upper middle” or “lower middle.” 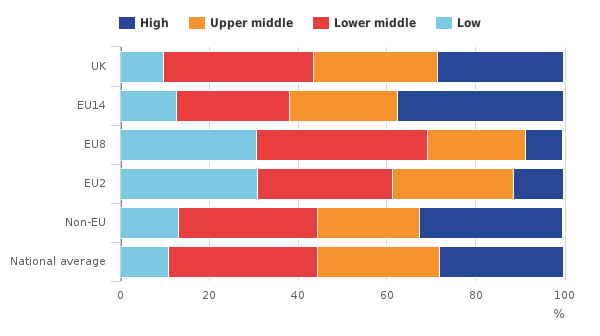 So those who claim we can cut EU migration by four-fifths simply by ending “low-skilled” migration, without any adverse economic impacts, are – at best – playing with words. They’re not – just- trying to exclude agricultural labourers and coffee shop workers, but hundreds of thousands of people doing ordinary, productive, middle income, middle skilled jobs – the sort of people our economy actually needs. It’s one thing to argue, as Nigel Farage does, that you dislike immigration so much you’d happily be poorer if that’s what it takes to get it down. It’s another to try to fool people that the tradeoff doesn’t exist.

By Jonathan Portes, senior fellow UK in a Changing Europe and Professor of Economics and Public Policy, King’s College London