Who will vote for the Alba Party? 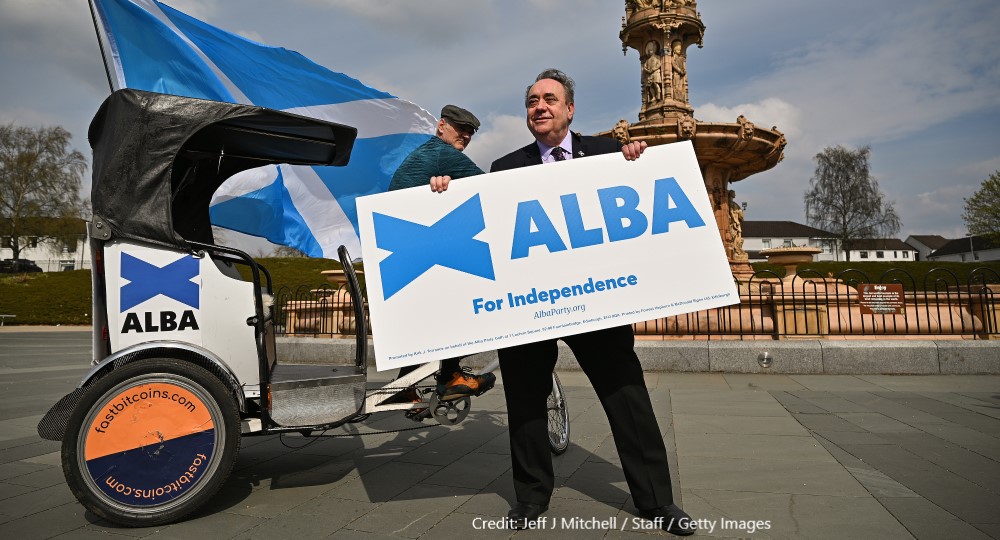 I originally intended to write about the Alba Party’s policies. It’s best to get these things from the horse’s mouth, so I went to their website and clicked on the link handily labelled ‘Our Policies’. And … nothing.

Well, almost nothing. There is a sign-up link for an Independence Policy Launch, timed to coincide with the 701st anniversary of the Declaration of Arbroath.

The Declaration of Arbroath, for those unfamiliar with Scottish independence lore, is a letter to Pope John XXII from the Scottish nobility asserting the Kingdom’s independence.

It is a document of great historical significance and has an important place in Scottish culture, similar to the position the Magna Carta enjoys in England.

Much like the Magna Carta, the Declaration of Arbroath continues to be invoked as a questionable legal authority. If you spend too long on certain corners of the internet you will see constant talk of the UDI, or Unilateral Declaration of Independence.

The Scottish National Party, representing mainstream nationalist opinion, focus on various means of achieving consent for a referendum and ruminate over the ideal question to put on the ballot paper, but the UDI-ists – like the newly-formed Alba – have no time for such dithering.

A vibrant and active scene of blogs, forums and Twitter accounts contains a wide range of perspectives on ways to achieve to ‘declare’ independence, but generally speaking they contend that the Declaration of Arbroath supersedes the 1707 Act of Union that united the parliaments of England and Scotland.

This means, in turn, that the existence of the United Kingdom is illegitimate and illegal and all the Scots need to do is declare their independence – something on a post-it or a Tweet would suffice – and that’s that.

Putting the dubious legal arguments to the side, this is highly impractical and unlikely to ever be entertained by the mainstream independence movement.

Nonetheless, it’s something that most Scottish people will be familiar with, whether on the active pro-independence blogging scene or through social media – although only a minority actually support it. It is these people that Alex Salmond and the Alba Party hope to appeal to.

There has long been a debate between the fundamentalist and gradualist wings of the Scottish independence movement, and in recent years the gradualists have been dominant.

Ironically it was Salmond, in his former guise as SNP leader, who smothered much of the fundamentalist talk within his party. The fundamentalists, frozen out of party decision-making, retreated to their corners of the blogosphere.

Many of them continued to vote SNP, despite openly despairing of the party for their apparent lack of haste and for being distracted by the everyday business of devolved government.

Targeting this disgruntled minority, the Alba Party launched a video featuring Robert the Bruce actor Angus Macfadyen, in which Macfadyen, voicing the dead King, implores the “sma’ folk” of Scotland to “unite the clans” and save Scotland in 2021, just as they did at the Battle of Bannockburn in 1314.

This retelling of history, more Hollywood than Holyrood, featured the customary Braveheart quotes and railed against the dastardly Edward Plantaganet.

It was, of course, the subject of ridicule across the independence divide. SNP MP Pete Wishart branded it “embarrassing”, although as demonstrated by the pro-independence newspaper The National, which spoke of it in far more reverent terms, there is still an audience that laps this stuff up. Albeit one that is not electorally significant.

The Alba Party’s gamble seems to be that a cocktail of Covid-19, Brexit and the unpopularity of Boris Johnson and the Conservative Party would shift cautious independence supporters to this more fundamentalist position, with Salmond’s enmity of Nicola Sturgeon adding further animus.

This does not appear to be happening. While Covid-19, Brexit and Boris Johnson’s premiership have seen support for independence rise, they haven’t resulted in any notable clamour for a unilateral declaration of independence.

That constituency is unlikely to be big enough to see electoral gains. Yet, Alex Salmond is a man of formidable political gifts with past experience of attracting support to a cause.

In 2007, the year Salmond became First Minister, the Scottish Social Attitudes Survey reported 24% in favour of independence. Seven years later, 45% voted for independence in the referendum.

His reputation, already damaged by his 2017 decision to host a chat show on Russia Today, plummeted following his trial and acquittal of 14 charges of sexual misconduct and his complaint against the Scottish Government’s handling of the harassment complaints.

An April poll of Scottish voters found that Salmond had a net favourability of -51, even less than Boris Johnson.

The lack of support for the fundamentalist vision of independence and Salmond’s unpopularity mean that he is unlikely to replicate his past success of attracting voters to a cause.

His core are unlikely to desert him and he can rely on their votes, though current polling, veering between 2% and 6% of the regional vote, suggests that this won’t be enough to win them seats.