Why an election cannot replace a referendum 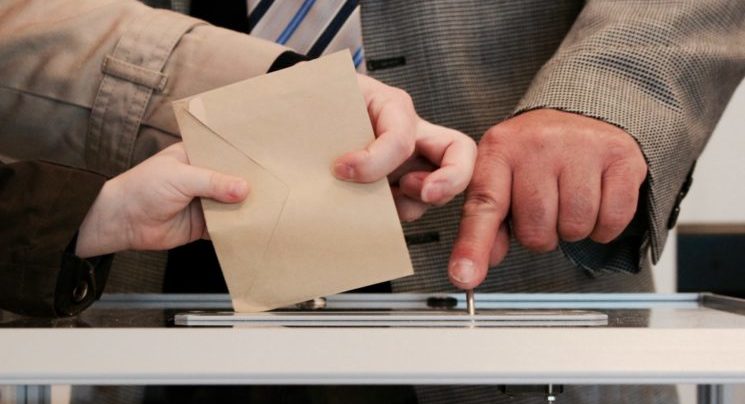 There are certainly good reasons to view Britain’s upcoming 12 December election as a de facto second Brexit referendum – just look at the central position the issue has taken for the parties.

However, it is important to remember that the processes of elections and referenda are designed to fulfil different functions and that, due to the way they are structured, they can deliver different outcomes – even when voter input remains the same.

The ultimate goal in any election is not to win votes per se, but to win a majority of the seats, and thus to form a government.

That means the raw number of votes a party wins is only one consideration for its strategists – just as important is how those votes convert into seats.

Parties that are able to maximize their vote-to-seat ratio – those that can win more seats with fewer votes – are at a distinct advantage over others.

Indeed, when vote-to-seat conversion is high a party can easily gain seats while losing vote share.

In recent times, the Conservative Party and the SNP have been particularly adept at translating votes into seats, while Ukip and the Liberal Democrats have been less fortunate.

The vote-to-seat breakdown for the major parties in the 2015 general election was: 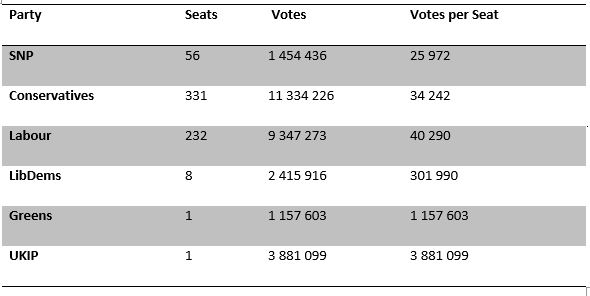 The Green vote, comparable to the SNP vote, resulted in 1/56th of the seats, a result shared with Ukip, which received approximately 2.5 times as many votes as the SNP did.

For 2017 the figures were as follows: 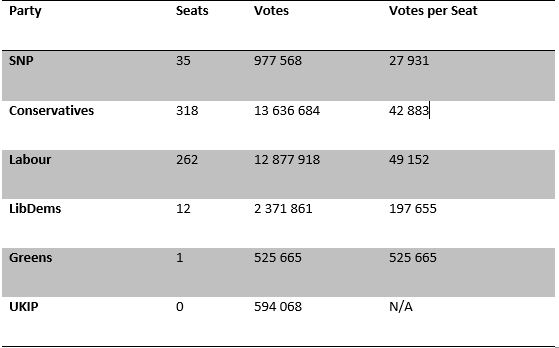 As these figures indicate, the general rule is that electoral voting tends to skew in favour of larger parties and parties that enjoy a regionally-focussed vote (such as the SNP).

Parties with a moderate level of support that is spread more evenly throughout the country tend to suffer, as they can potentially win millions of votes while failing to win any one constituency.

This was again the fate of Ukip in 2017, which won around 60% as many votes as the SNP, but achieved no parliamentary representation, while the SNP continued to enjoy the highest vote-to-seat conversion rate by a considerable margin.

The conventional wisdom has been that this electoral skewing in favour of larger parties helps form strong single-party cabinets.

The same principle, however, also means that relatively slight shifts in voting behaviour can lead to massive changes in a party’s fortunes, as it can tip scores of seats into another party’s hands.

Electoral voting thus tends to either result in government that is an exaggeration of majority will in terms of seats won, or, more rarely, a flip into minority rule by a so-called ‘manufactured majority’.

With referendums, however, things look different.

Results are tabulated nationally, as if the entire country were one large constituency. There are no wasted votes.

There need be no considerations of vote splitting among similarly-minded parties or tactical voting.

And because questions are generally binary (yes/no) one cannot leverage a popular vote of under 50% into any kind of victory.

Whatever else referendums may be, unlike elections, they are an accurate picture of how the electorate voted on a given question on a given day.

These differences are part of the reason there has been such a discord between the Brexit referendum result and the parliamentary process.

Several parties, in particular Ukip and the Liberal Democrats, had large numbers of votes that they could not be translate into seats.

Thus, strong views on EU membership were buried in the vote-skewing of the electoral process, but found expression in the Brexit referendum, where every vote ultimately affected the outcome.

Process is an oft-overlooked component of politics, but it is process that often controls everything else.

The process used to take stock of national opinion – be it a referendum or an election – often changes the outcome, even just based on votes, and without considering the different factors that can come into play with different processes, such as constituency service and lead candidate personality.

The coming election may reconcile parliamentary composition to the Brexit referendum outcome by delivering an amplification of the 2016 majority Leave vote in the form of a comfortable victory for the now pro-Brexit Conservative Party.

However, even supposing this rough alignment is delivered, it will have come with a considerable delay and a great deal of party politics having been imposed on the issue between these two events.

The bottom line is that by virtue of how they are constructed, referenda and elections aren’t very good imitators of each other.

Rather than being two tools to get to the same result, they are two different processes that stem from two different ideologies that can lead to very different outcomes.

By Dr. Roslyn Fuller, managing director of the Solonian Democracy Institute and the author of Beasts and Gods: How Democracy Changed Its Meaning and Lost Its Purpose and In Defence of Democracy.