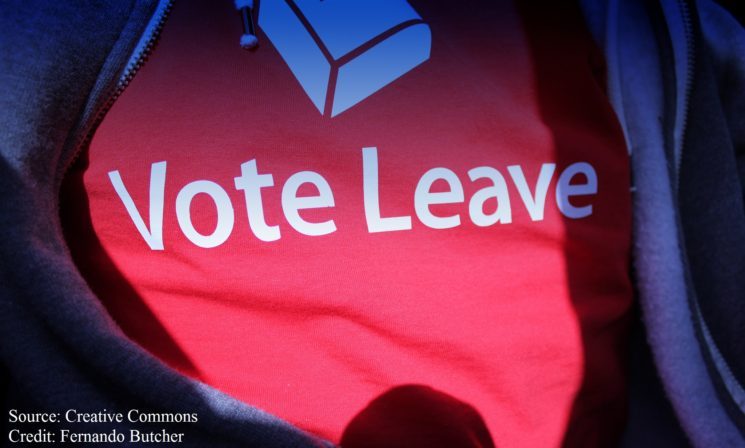 Brexit has delivered a political earthquake, the tremors of which will be felt for generations to come. Contrary to many of the academic polls, forecasts, betting and other prediction markets Britain has voted to end its membership of the European Union. While some of us saw the result coming, many did not. In the days that followed Britain’s currency slumped to a 31-year-low, Prime Minister David Cameron resigned, a constitutional crisis in Scotland was revived, a new one in Ireland was born and Labour descended into a full-blown crisis. As one journalist quipped the day after the referendum: “It has been a rather strange day. The prime minister has resigned and it’s only our third most important story.”

How could Eurosceptics — who had been consistently underestimated — defeat the Remain camp by nearly 4 percentage points or 1.3 million votes? It is a question that will be debated for years to come and is especially intriguing once you focus on the result in England, which was not even close. Prior to the referendum I had wondered openly in this bulletin about the neglected power of Englishness. And in the end this quiet force that has bubbled below the surface of our politics helped to push Brexit over the line. In England the Leave camp stomped home, winning the referendum by nearly 7 points.

It would be a mistake to view the result last Friday as exclusively a judgment on Britain’s relationship with the EU or a verdict on the preceding referendum campaign. Triumphant campaigners in the Leave camp will inevitably acquire legendary status among their followers. But the reality is that they were pushed on by something that is far more powerful than any political campaign – currents that have been deeply embedded into the fabric of British society for decades, that are visible only among specific groups of voters and which in the early hours of June 24 were given full expression in the results that flickered on our television screens.

Britain’s vote for Brexit is anchored in deep divides that have been visible and growing for decades. The Remain campaign’s miscalculation was that it failed to grasp them. The Leave campaign’s strength was that it deployed a message that spoke convincingly and clearly to them.

The town that gave the strongest support for Brexit was the small, East Midlands port of Boston where 76 percent of the local electorate voted to leave the EU. Boston, which also delivered the highest support for Nigel Farage’s self-anointed People’s Army at the 2014 European Parliament elections, throws some immediate light onto the Brexit heartlands.

The town, which has experienced significant migration from Central and East European states, is also noticeable for its stubbornly persistent economic deprivation. The median income in Boston is less than £17,000 and one in three people have no formal qualifications at all. Filled with disadvantaged, working-class Britons who do not feel as though they have been winning from European integration, immigration, and the global market, Boston turned its back firmly on the status quo. 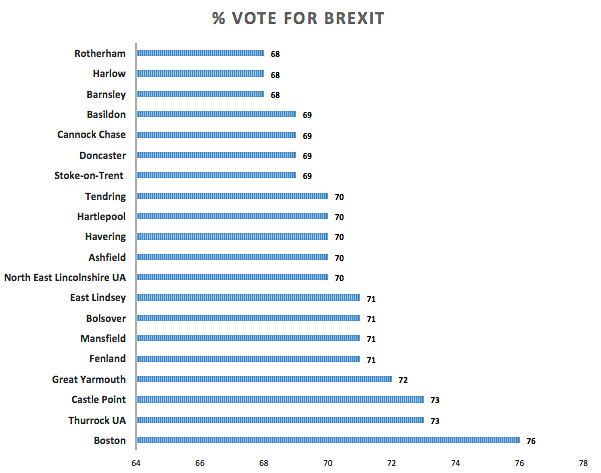 Life in that East Midlands town contrasts sharply with that in the area of Britain that returned the strongest vote for Remain, the London borough of Lambeth. Here, where 79 percent voted to remain in the EU, life is remarkably different. Compared to Boston, there are more than twice as many professionals, nearly twice as many 18-30-year-olds and fewer than half as many working-class voters, pensioners and people with no qualifications. The average voter in Lambeth earns nearly £10,000 more each year than the average voter in Boston. 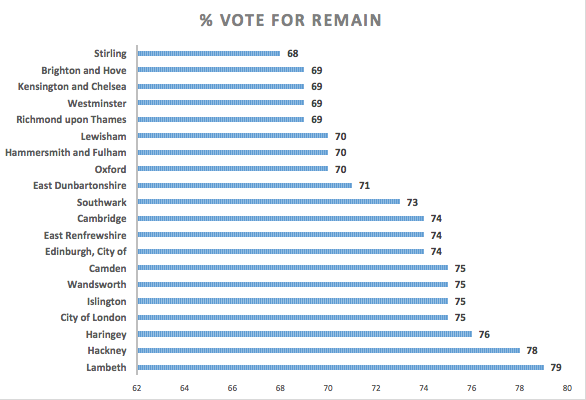 As my earlier academic research with Simon Hix and Mark Pickup suggested, the Remain camp would have been best placed by making a positive case for Britain’s EU membership. Instead, Cameron and co. spent almost of their time focusing on the negatives of Brexit, robotically pointing to the negative economic implications of Brexit. This was the third fear-based campaign that the British electorate has been exposed to in as many years, after the Scottish independence referendum and the 2015 general election. Perhaps many voters had become immune to such tactics. But the problem for Remain was also that the economically disaffected voters who were tempted by Brexit were already resigned to believing that their future would be worse than the past. And they were clear about who was to blame.

Consistent with our past research on the roots of support for Euroscepticism (see here and here) Brexit drew most of its strength from voters who have feltleft behind by the rapid economic transformation of Britain, or more accurately of London and south-east England. They hold a more socially conservative outlook on Europe, immigration, and national identity that in recent years have become just as important as old disputes between labor and capital. Such voters have felt increasingly cut adrift from established parties who have spent much of the past two decades pitching to the middle-classes. Tony Blair and David Cameron both gambled in their own ways that as they battled to attract the middle-classes their more working-class voters would stay loyal. As one New Labour campaigner said to me a few years ago: ‘Where else do they have to go?’ But then along came Europe and immigration, which cut directly across the old left-right divide. And, crucially, these were issues that were organised far more around a divide between social liberals and authoritarians.

The referendum presented blue-collar workers on the left and older social conservatives on the right with a unique opportunity to rebel against their socially liberal and middle-class elites who in recent years have promoted values that these voters abhor. Last week -and without being constrained by the first-past-the-post system – these voters seized their opportunity. By voting for Brexit a more disadvantaged and left behind electorate imposed a different set of values on the landscape than those that unite the London-centric media and political classes. As my co-author Robert Ford noted after the result: “Feeling upset by wrenching social change that has been imposed on you by people whose values you don’t share or understand? Now you know how UKIP voters have felt.”

Brexit owed less to the personal charisma of Boris Johnson, the failings of David Cameron, or the ambivalence of Jeremy Corbyn than to a much deeper sense of angst, alienation and resentment among more financially disadvantaged, less well-educated and older Britons who are often only one financial crisis away from disaster. They are the voters of old industrial strongholds, like the northern towns of Barnsley, Mansfield, Stoke and Doncaster, Welsh towns like Merthyr Tydfil that once fueled the industrial revolution, fading coastal towns like Blackpool, Great Yarmouth and Castle Point, and blue-collar but aspirational places like Basildon, Havering and Thurrock. And it is striking how this rebellion has posed big questions for both parties. As one of my academic colleagues has noted, while Brexit was a majority in 75% of Conservative-held seats it was also the majority view in seven in ten Labour-held seats.

It is certainly true that Brexit also found support in more leafy, affluent Conservative areas such as Aylesbury, Chichester, South Bucks and West Dorset where previously loyal Tories rejected Cameron’s increasingly desperate pleas to remain. I do not dispute this – not all Brexit voters fit within this discussion of left behind Britain. As the LSE academic Tony Travers pointed out to me after the result, by voting against their leader these Conservatives have confirmed Cameron’s status as the third prime minister in post-war Britain who will principally be remembered for just one thing; after Anthony Eden and the Suez Crisis, and Tony Blair and Iraq, future generations of students will write about Cameron as the man who took Britain out of the EU and who also, given the high probability of a second independence referendum in Scotland, possibly also caused the break-up of the United Kingdom. It is entirely possible that David Cameron will be remembered as one of the most unsuccessful leaders in our modern political history. That’s the thing with gamblers – when they lose, they lose big.

It remains the case, however, that support for Brexit was unquestionably strongest in a more economically marginal and left-behind Britain. This is why Nigel Farage and UKIP are an unpopular but important part of the story of how Brexit came to life, having cultivated the underlying political discontent throughout the early years of the 21st century. Brexit was built on foundations that had been laid by UKIP. Two years ago, at the European Parliament elections, Farage and his party had already averaged 39 percent of the vote across the 50 areas that went on to give the strongest support to Brexit at the referendum but averaged only 13 percent in areas that gave the strongest support to Remain. The relationship can also be seen in my colleague Jon Mellon’s chart below, which plots the Remain vote alongside Ukip’s vote at the 2015 general election. Farage never made it into the House of Commons but his decision to fuse Europe with immigration in the public mindset allowed Eurosceptics to achieve something far greater – to transform Euroscepticism from a fringe interest into a mainstream concern that would eventually deliver their lifelong ambition of a Britain that stands firmly apart from the European Union. 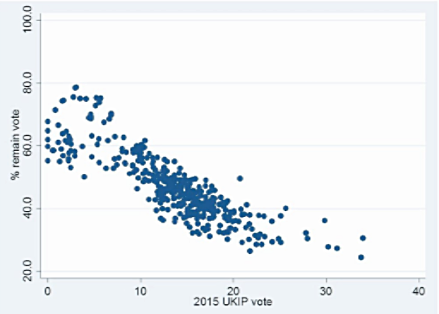 Remainers have unsurprisingly criticised the result and demanded a re-run but such an outcome will not be forthcoming. It is worth noting that of the 50 areas that recorded the lowest turnout no fewer than half of them were in London or Scotland, two areas that were supposed to be hotbeds of Remain fervor. In the end the Remain camp simply failed to enthuse who they needed to enthuse. Prior to the result the Remainers had talked enthusiastically about targeting the large, young, diverse cities but when the dust cleared it was Manchester, Nottingham, Dundee, Birmingham and Liverpool where voters had turned out in lower numbers. This owed less to problems with getting out the vote than to a broader campaign message that never felt compelling or particularly convincing.

Most academics, including myself, would reject the claim that higher turnout in these areas would have altered the final result but it is worth noting that areas where objections are loudest are often those where the turnout was lowest. For instance, while the London districts of Hackney and Camden are among the top five areas in terms of the number of people wanting a second referendum, these same areas were also among the bottom 10 percent for turnout, a fact Remainers might like to reflect on.

Now, we run headlong into a Conservative Party leadership election, the outcome of which will determine the finer details of Britain’s new relationship with Europe. Should the new Conservative leader fail to respond quickly and clearly on the core motive for Brexit voters -immigration- then it would be the equivalent of pouring gasoline all over the Ukip fire. Britain’s left-behind have already demonstrated their willingness to punch the political elite in the face. I wouldn’t test them again.

By Professor Matthew Goodwin, senior fellow at The UK in a Changing Europe.