Why did Scotland vote to remain? 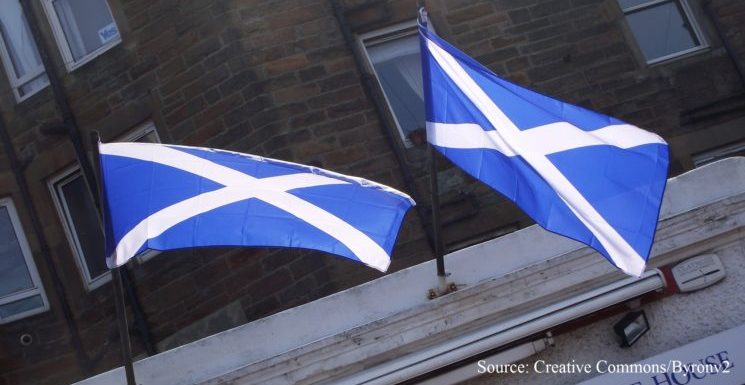 The outcome of the referendum on the UK’s membership of the European Union was, of course, very different in Scotland than in England and Wales. North of the border 62% voted to Remain while 38% backed Leave. In the rest of Great Britain, in contrast, only 47% voted to Remain, while 53% supported Leave.

So divergent an outcome inevitably raises the question, ‘why did Scotland vote to Remain when the rest of Britain voted to Leave?’. Did older voters and those with fewer educational qualifications north of the border not share the scepticism that was commonplace amongst such voters in England and Wales? Did voters in Scotland simply take a different view of the economic consequences of Brexit or of its implications for immigration? Or were they swayed to a greater – or lesser – extent by the economic arguments and those about immigration and identity than were their counterparts elsewhere?

Although there have been some clues about the answers to these questions in the opinion polls published since June 23rd, between them they have offered little opportunity to compare the pattern of voting on the two sides of the border systematically. However, the week before last, the academic British Election Study released the latest wave of data from a very large internet panel it has been running since the beginning of February 2014. This wave consists of just over 30,000 interviews conducted shortly after the referendum – including no less than 3,600 in Scotland. With everyone on both sides of the border asked the same questions about the referendum, these data make it possible to undertake the systematic comparison that has hitherto been impossible.

The first key point to emerge (see Table 1) is that the sharp social divisions by age and educational background that were uncovered across the rest of Britain by the referendum are also in evidence north of the border. While 73% of those aged 18-34 backed Remain, only 54% of those aged 55 and over did so.  Whereas 74% of graduates in Scotland voted to Remain, only a minority (41%) of those with no qualifications did so.

True, the age and education gaps are somewhat smaller north of the border. Whereas in Scotland there is a 19 point difference between younger and older voters in their level of support for Remain, in England and Wales the equivalent figure is 28 points. The 33 point gap between graduates and those without any qualifications in Scotland is also a little less than the 38 point difference south of the border.

So, while the social divisions exposed by the referendum were clearly in evidence north of the border, voters of all ages and of all educational backgrounds in Scotland were more likely than their counterparts elsewhere in Great Britain to want to stay in the EU.

One possible explanation is that voters in Scotland were less enamoured of the possible consequences of leaving the EU. Indeed, there is some evidence to support that claim from the answers that the BES panellists gave when they were asked shortly before the referendum what they thought the effect of leaving would be.

For example, as many as 41% of people in Scotland felt that the ‘general economic situation in the UK’ would be worse if we left the EU, compared with 34% in England and Wales. Further, somewhat fewer (50%) felt that immigration would be lower, than did so in England and Wales (56%). At the same time, whereas 47% of those living south of the border agreed that ‘Being a member of the European Union undermines Britain’s distinctive identity’, only 39% of people in Scotland did so.

These differences of between five and eight points in the distribution of attitudes towards the EU are typical of a wide range of other questions about what would happen if we left the EU that were also included on the BES survey. However, they are less than the 15 point difference in the level of support for Remain that was found in the ballot boxes. It seems that the higher level of support for Remain in Scotland cannot simply be accounted for by the fact that voters in Scotland were less taken with what Brexit might bring.

In fact, even in England and Wales almost everyone – 92% –  who felt that the economy would be worse if the UK left the EU voted to Remain. So, it is not surprising that the proportion in Scotland – 94% – is much the same. Meanwhile, on both sides of the border just 10% of those who thought the economy would be better following Brexit nevertheless still voted to Remain (see Table 2).

Equally, while 78% of those in England and Wales who thought that immigration would not fall following Brexit voted to Remain, so also did 80% of those in Scotland. Equally, the level of support for Remain varies according to people’s views on the implications of being in the EU for Britain’s identity in much the same way on both sides of the border.

That said, however, there are also some important differences. First, those in Scotland who thought that leaving the EU would not make much difference either way to the UK’s economy were more inclined to want to stay in the institution. While just 29% of people in England and Wales who were of that opinion voted to Remain, rather more, 43%, did so in Scotland.

Equally, voters in Scotland who did reckon that immigration would fall if we left in the EU were more likely to vote to Remain than their counterparts elsewhere. As many as 43% did so – compared with just 29% in England and Wales.

So, in some instances voters in Scotland who adopted much the same view about the consequences of leaving the EU as did those in England and Wales were nevertheless more likely to vote to Remain. How might we account for such a pattern?

One of the claims often made about voting in referendums is that voters’ decisions about which way to vote are influenced by the cues that are sent out by the party that they support. In the EU referendum, Labour (and most though not all Labour MPs) campaigned to stay in the EU, while the Conservative party was officially neutral and prominent Conservative politicians were to be found campaigning on both sides of the argument. These stances were reflected in the way in which supporters of those parties voted. According to the BES data (see Table 3) just 36% of those who voted Conservative in 2015 voted for Remain, while in Labour’s case 71% did so.

Much the same division is to be found amongst Conservative and Labour voters north of the border. While 72% of Labour voters in Scotland backed Remain, only 44% of Conservative supporters did so (the fact that the latter figure is a little higher than in England and Wales may be a reflection of the fact that the party’s Scottish leader, Ruth Davidson, was a prominent advocate of Remain).

But, of course, it is the SNP that dominates political sympathies north of the border and, in contrast to its stance on the occasion of Britain’s initial referendum on EU membership in 1975, the party campaigned in favour of Remain. After all, ever since the late 1980s the party’s conception of independence has been of ‘independence in Europe’.

Thus, as we might anticipate, SNP voters were also much more inclined to vote to Remain than to Leave, albeit that they were far from unanimous in doing so. According to the BES panel data 74% of those who voted SNP in the 2015 general election did so. Moreover, SNP supporters were also more likely to vote for Remain irrespective of their views on the consequences of leaving the EU.

For example, amongst those SNP supporters who thought that leaving the EU would not make any difference to the UK economy, no less than 57% voted to Remain. This is higher than the equivalent figure of 43% amongst all voters in Scotland, let alone the 29% figure to be found amongst voters in England and Wales.

Equally, no less than 62% of those SNP voters who thought that immigration would increase if the UK left the EU voted to Remain nevertheless – again well above the equivalent figure for everyone of that view in Scotland (43%) and in England and Wales (29%).

In short, it seems that many a SNP supporter in particular voted to Remain in the EU even though they were not convinced that leaving would be harmful for the economy and even though they anticipated that immigration would fall if Brexit were to happen. Meanwhile, of course, the fact that rather fewer people in Scotland than in England and Wales thought that leaving the EU would be beneficial in the first place may well itself, in part at least, be the product of the SNP’s support for ‘independence in Europe’.

So, many of the social divisions about Brexit and some of the key arguments about what it might mean helped shape voters’ decisions in Scotland in much the same way as they did in England and Wales. Scotland voted to Remain even though those forces were in play just as they did on the other side of the border. However, in a country where UKIP has little resonance and where a pro-European SNP has come to dominate the political landscape, views that elsewhere disinclined many a voter to back Remain had less impact north of the border.

However, in voting to Remain some of those voters at least were seemingly telling us more about what they thought about ‘independence in Europe’ than they were about the merits of the UK’s membership of the European Union. Little wonder, then, that the UK-wide decision in favour of Brexit has served to stimulate afresh the debate about a second independence referendum north of the border.

By Professor John Curtice, senior fellow at The UK in a Changing Europe. This piece originally featured in WhatScotlandThinks.