Why does off-farm income matter to the UK farm households? 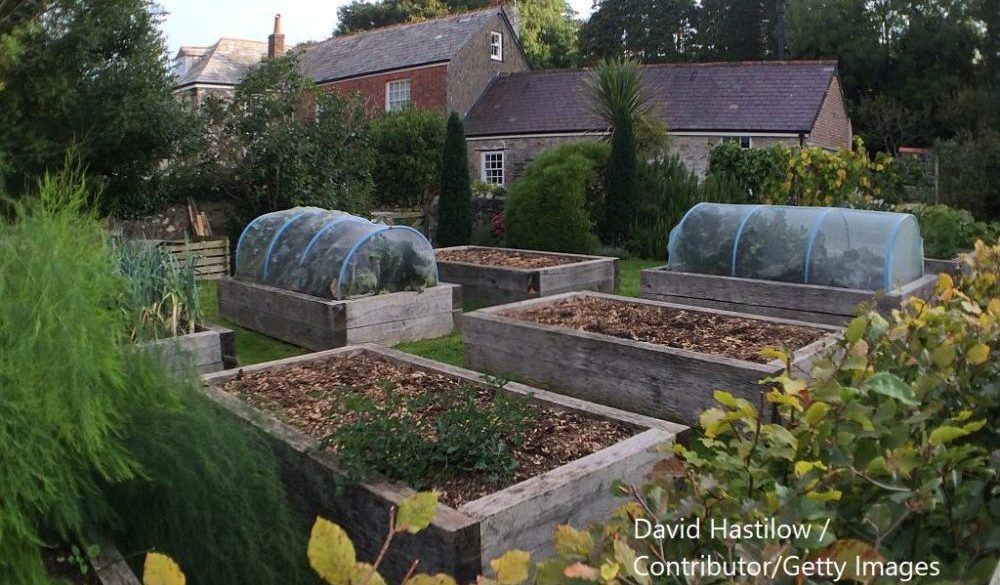 From 1 January 2021, the UK officially ceased to be a member of the EU. Leaving the EU also meant leaving the Common Agricultural Policy (CAP) which has shaped our agriculture for almost half of century. Under the CAP, British farmers benefited from very generous subsidies, worth in total over £3 billion a year.

Recent research highlights that EU exit, particularly the elimination of CAP subsidies (in the form of direct payments), is likely to have a significant negative impact on the income of UK farmers.

Initially introduced in 1992, direct payments aimed to compensate farmers for the loss of income following the reduction of price support.

Over the years, farmers have become very reliant on this type of support, with direct payments accounting on average for over half of farm income (in 2018/19). Livestock farmers, particularly those in the uplands with beef and sheep, are almost totally dependent on these payments.

The National Farmers Union estimates that the reduction of direct payments by 2024 will hit the sector very hard, with farmers losing between 60% to 80% of their income.

However, the impact is far from uniform across farm types and countries, with Scottish farmers taking the hardest blow.

So, much will depend on the national policy measures that replace CAP support, but also on farmers’ capacity to adapt, adjust and modernise their production, and their ability to diversify into non-farming activities to alleviate impacts.

Our research shows that income from non-farm activities (which we refer to as ‘off-farm income’) is vital in safeguarding the survival of many UK farm households.

By considering the balance between farm and off-farm incomes, we can define several categories: farm households that remain viable, those that are sustainable, and those that are vulnerable.

For example, a farm is viable if the income from farming allows the household to cover its costs, meet its living expenses and repay its debts.

When the farm is neither viable nor sustainable then it finds itself in a precarious financial situation, and hence it becomes vulnerable.

So why does off-farm income matter especially in the face of post-Brexit challenges?

We investigated over 2,800 UK farms representing 73,200 commercial farming businesses across all main farm types in the UK, of which around half had a heavy dependency on CAP direct payments.

We modelled the impact, for the UK as a whole and on the devolved administrations, of both the continuation and elimination of this support under various forms of post-Brexit trading relationship – including different formats of free trade agreement (FTA).

These scenarios were compared with a baseline which assumed a continued and unchanged EU membership. Our estimates show that even in the hypothetical case of continued EU membership, the share of farms that are viable across the four nations is small, varying between 14% in Scotland and 29% in England (Figure 1).

The elimination of direct payments further reduces these shares to about 2% in Scotland and 15% in England, respectively.  More importantly, the number of vulnerable farms also rises in all countries, but particularly in Northern Ireland – where 40% of all farms will struggle to survive.

Thus, the presence of off-farm income is critical in safeguarding the livelihood of most UK farm households, particularly grazing (beef and sheep) livestock (Figure 2).

Access to these kinds of off-farm income could decrease the vulnerability of farm households across the nations and across farm types (Figure 2), and plays a decisive role in their resilience in coping with income volatility. 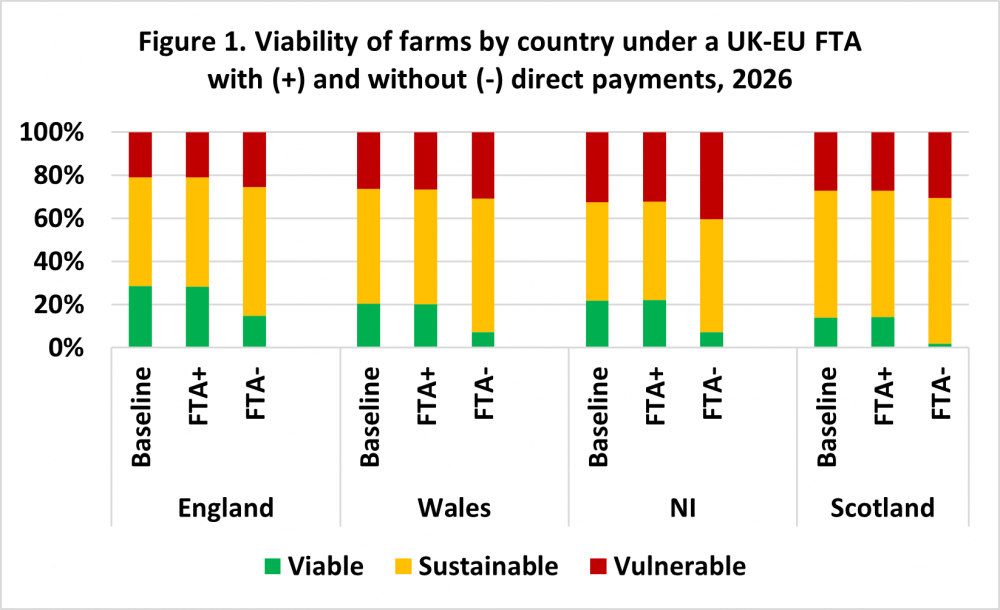 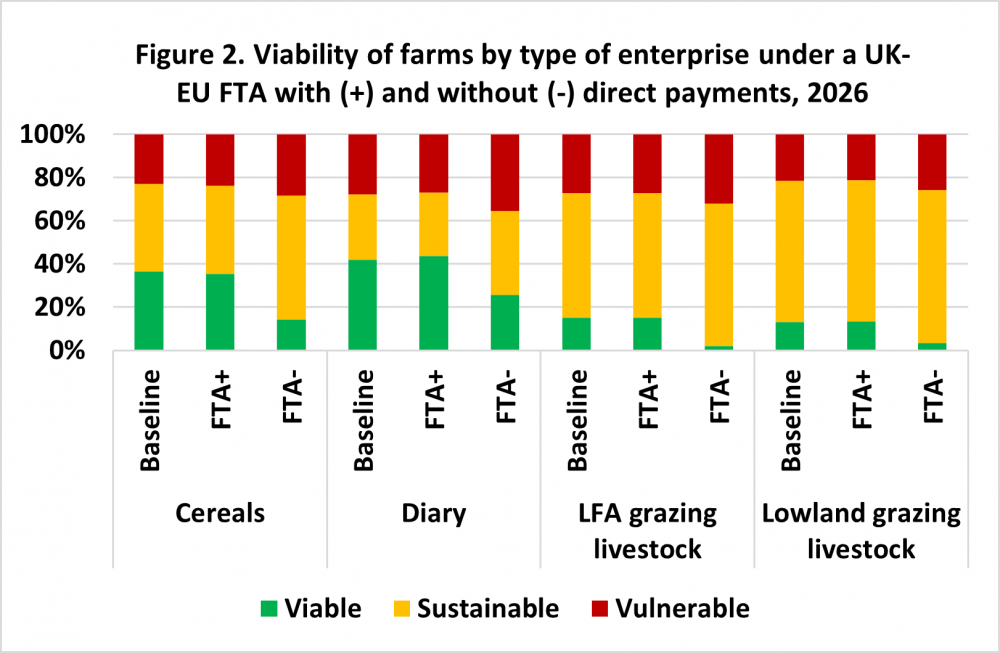 However, off-farm income is unlikely to sustain non-viable farms indefinitely: basic levels of profitability are necessary for their longer-term survival.

Rather, off-farm income provides a buffer that helps to smooth the adjustments needed to either improve farm business performance or to divest those activities in an orderly way.

Farm households that lack the cushion of off-farm incomes may face more chaotic or abrupt transitions including business failures.

UK farmers are guaranteed to receive the same level of subsidy as under the CAP until the end of 2022, but the eventual elimination of these support payments will potentially have significant effects on farm profitability.

However, the impact of Brexit on UK agriculture will be far from uniform and given the dependence of many UK farms on direct payments, their removal predictably affects most farm businesses. The magnitude varies significantly by devolved administration and farm types.

In addition, although the agricultural sector can survive and adapt, especially in the current trade agreement between the UK and the EU, hardship might hit various family businesses.

Whilst viability could be sustained through increased off-farm income, it is equally true that it could be also improved through alternative policy support.

The proposals for a new environmental land management scheme in England provides very little detail regarding what the support will look like; who will benefit, and how, remains unclear.

Policy differences between the four nations – either the rapid elimination of support payments (in England) or their retention (in Scotland) – may also lead to tensions about fairness and market competition across the UK’s internal market.

Both Brexit and the Covid-19 pandemic have added great pressure to our farming sector, but as with previous economic and health crises (such as mad cow disease and Foot and Mouth) British farmers have proved to be resilient, and we have seen farm businesses adapting, reorienting and adjusting their activities. However, as with any significant policy changes there will always be winners and losers.