Why talk is growing around “blind Brexit” 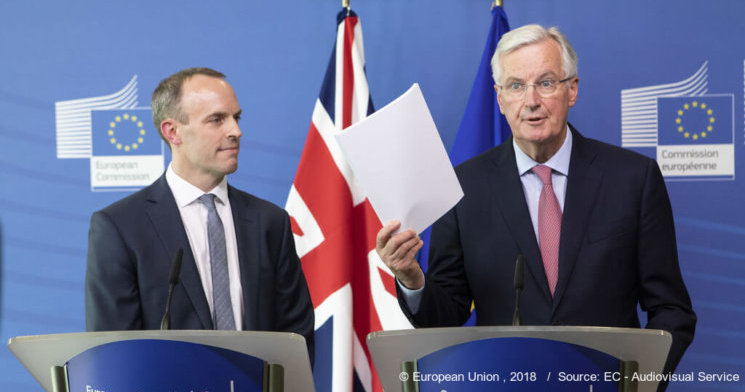 Red, white and blue. Jobs first. Hard. Soft. Brexit with a runny middle. There is seemingly no end of ways to describe the UK’s exit from the European Union.

You might even have heard the latest—a “blind Brexit.” Michael Gove referenced it over the weekend in his interview on Andrew Marr.

Alastair Campbell has said it’s “as bad as no deal.” And French President Emmanuel Macron is apparently opposed to it.

But what exactly is it? Is it likely to happen? And why does it matter?

What is a “blind Brexit”?

Put simply, it describes a situation where the UK leaves the EU without knowing what kind of relationship the two will have in future.

This possibility arises from the fact that there are two parts to the Brexit deal: the Withdrawal Agreement, which will be a legally binding treaty setting out the terms ending the UK’s EU membership; and the statement on the future relationship, which will not have the same legal force.

But you could be forgiven for finding this confusing. Even Brexit Secretary Dominic Raab seems to have had trouble grasping the difference.

In a recent statement to the House of Commons he said “The financial settlement [in the Withdrawal Agreement] … was agreed on the basis that it would sit alongside a deep and mutually beneficial future partnership.” In other words, we’ll give them the money and they’ll give us a trade deal.

This is not the case. Only after we have left the EU on 29th March 2019, will we begin to negotiate properly the future relationship. The transition period that has been agreed will keep things broadly as they are until the end of 2020, but there is currently no guarantee of what our relationship will be like thereafter.

Whether this sequencing of the negotiations was inevitable from the very beginning is arguable. The Commission would say that parallel discussions on the future and withdrawal were not possible within the treaties, whereas others suggest they would have been.

But there is no guarantee that this will transpire, particularly if there is a change of political leadership in the UK.

Is blind Brexit likely to happen?

As a result, blind Brexit is now the only Brexit available. And even if the UK were now in a position to negotiate a treaty on the future relationship, having established detailed domestic policy on the likes of agriculture and fishing in order to inform those talks, there is nowhere near enough time left to complete such a deal.

David Henig, a former UK government trade advisor, has estimated that reaching a deal could take anything from five to ten years.

This is only an estimate, but there is an obvious principle at play: the more complex the deal, the longer it will take to negotiate. This is partly why the EU has insisted on sticking to precedents.

All sides know roughly what goes into a Canada-style free trade agreement, where the EU has already done the groundwork of striking its own internal compromises. For this reason alone, a bespoke UK deal without precedent will take much longer.

With only six months to go, both sides are still yet to complete the first part of the talks on the Withdrawal Agreement never mind a deal on the future. Even if a legally-binding trade deal were on the table, we wouldn’t be in a position to strike one.

Why does it matter?

The detail of the future relationship matters because it is arguably the most consequential part of the UK leaving the EU. Of course, for EU citizens in the UK and UK citizens in the EU, the Withdrawal Agreement is hugely significant.

The same goes for communities living near the border in Northern Ireland and the Republic.

But for the vast majority of UK citizens, where Brexit will take effect most obviously will be in the deal we sign on the future, determining how we trade and travel, and how security arrangements work.

Trade negotiations in particular are some of the most contentious talks a government can engage in. They inevitably involve compromise in access between countries’ markets, which will benefit some companies and industries but will increase competition for others.

Who and what the government decides to prioritise is a huge uncertainty, not least because while we have been an EU member we have handed this responsibility over to the European Commission.

But there is a way in which MPs can mitigate the level of blindness. They could attempt to extract a concession from the government before they approve the Withdrawal Agreement that guarantees them a second “meaningful vote,” this time on the future relationship treaty once that is negotiated.

Otherwise, it will be difficult for them to exert influence over the government once the UK has left the EU.

By Matt Bevington, policy researcher at The UK in a Changing Europe. This piece originally featured in Prospect.