Why the CBI are right 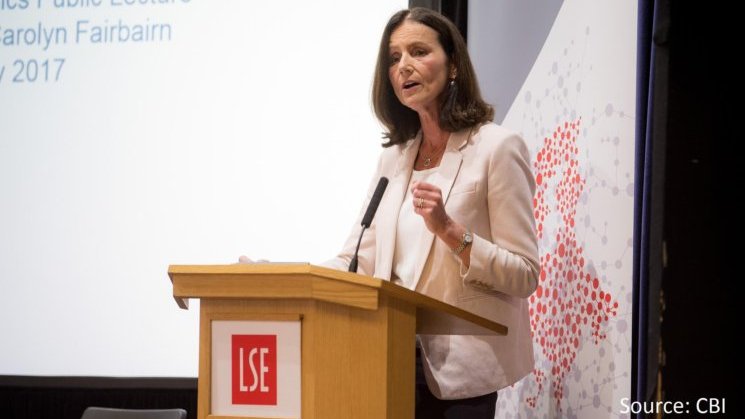 In a recent speech Carolyn Fairbairn and Rain Newton Smith of the Confederation of British Industry, have made the case for an extended period of transition, with the UK remaining part of the Single Market for some years after Brexit in March 2019

The CBI argument has been met with scepticism by those who have argued for a strong or hard Brexit e.g. the Daily Telegraph reports that the pressure group Change Britain responded by saying: “Committing to stay in the EU’s Single Market and Customs Union during a transition period would only serve to tie our hands during negotiations, and make it more likely that the EU gives us a bad deal.”

Our work on the trade consequences of Brexit and a conference we ran in Dec last year, on behalf of the UK in a Changing Europe Initiative suggests that the CBI are absolutely right and Change Britain are wrong.

At root this comes down to recognising that Soft v. Hard Brexit is a misleading characterisation. Media and political discussion have characterised Brexit as a binary choice between ‘soft’ (retaining current trade arrangements with the EU) and ‘hard’ (jettisoning all existing trade arrangements in order to start out afresh). This is a dangerous oversimplification. It ignores the realities of negotiation with the EU and other trade partners. The choice is not all or nothing, rather we have an opportunity in negotiation to agree anything across a wide range of potential outcomes) and the practical challenge of replacing the large investments in existing trade arrangements by both UK business and UK government.

A better analogy is moving house. Brexit is better seen as the decision of a family to leave an old house in order to move into a new building with better facilities. The family has agreed that the move is worth the costs involved and a final decision has been made to leave. This does not mean that it is necessary to leave the old house today and live in the open air while the new house is being constructed.

Constructing of the new building will though take time. A comparatively straightforward step is leaving the EU Customs Union and imposing external tariffs largely based on those that currently apply externally to the EU. This can be done through a ‘rectification’, transferring all commitments on tariffs agreed by the EU on behalf of the UK back to the UK as a full member of the WTO. However, this will still take months and require investment in systems and procedures at the UK frontier.

Non-tariff trade barriers (regulations, products standards) and rules applying to trade in services – I.e. where we currently benefit from deep and comprehensive arrangements of the EU single market – are more difficult, not least because of the requirement for mutual recognition of standards and regulations and a process of dispute resolution when compliance is questioned. Creating the apparatus for monitoring non-tariff barriers for UK trade both with the EU and countries outside the EU, with all the systems and staff required, will take one or two years not months.

Obtaining the ‘permissions’ for a construction plan will take even longer. We need to agree new trade arrangements with our EU partners and other countries (we cannot just adopt existing arrangements since that would be staying in the single market and customs union that we plan to leave). This will take several years.

Tariff-arrangements are again more straightforward. Most EU external tariffs are fairly low. The principal exceptions are motor cars and motor car parts and agricultural products. It should be possible to negotiate these two sectors as special cases and find a solution of mutual benefit. Agreement should be possible in a year or two.

Negotiation of non-tariff arrangements with the EU is where the greatest problems arise, requiring sector by sector agreements (in financial services, law, architecture, other business services, motor cars, aeronautics, pharmaceuticals, food and drink, to mention just a few prominent sectors). Some institutional arrangement will also be needed to police agreements (one way to speed up final agreement will be to allow the ECJ jurisdiction over UK-EU trade, but some in the UK prefer the creation of a special independent legal authority).

Moreover, nothing is agreed until everything is agreed. Based on past experience of international trade negotiations – which have never attempted such a deep and comprehensive reworking of trade as must now take place between the EU and the UK – a period of ten years could be needed. With good will and hard work, this may be achievable in about five years.

Figure 1 illustrates the possible choices for our future trading arrangements, as we see them from our work, analysed in the two dimensions of cost and time. 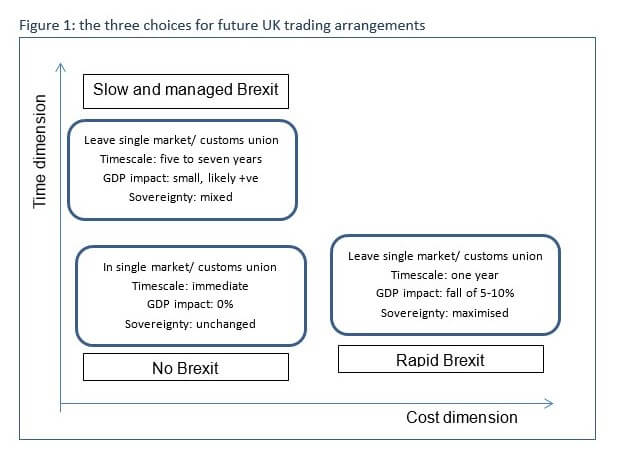 No-one wants a costly Brexit that takes a long time (hence there is no choice presented in the upper-right quadrant of Figure 1). There is though an unavoidable trade-off between cost and time. Doing Brexit quickly makes it unavoidably costly because we are then unable to replace the single market rules with the EU with a new framework to overcome non-tariff barriers to UK-EU trade (the ‘rapid Brexit’ box on the lower right hand quadrant of the Figure). The research that we review indicates that while the costs of a rapid Brexit are highly uncertain they will involve a loss of UK per capita consumption and GDP of the order of 5-10%.

The most appealing choice, that espoused by the CBI, is in the upper left quadrant of Figure 1, a slow and managed Brexit. This will require a transition period of several years, during which the UK will presumably continue to make EU budget contributions and participate in the customs union and single market. Withdrawal first from the customs union and then later from the single market can then take place, with these arrangements replaced by a deep and comprehensive free trade agreements with the EU.

While the time involved, five to seven years, will frustrate some supporters of Brexit this is necessary if we are to respect the referendum outcome and leave the European Union while avoiding substantial costs to the UK economy. Surely, politics allowing, this is the only sensible decision.