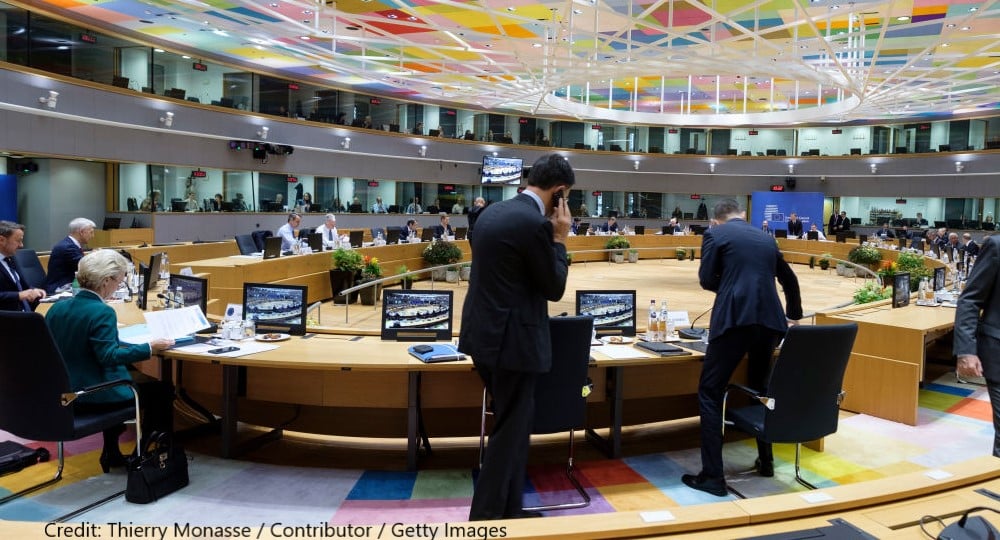 The EU began, in part, as an energy union. The European Coal and Steel Community was established in 1951 and provided for the pooling of coal and steel production between its six founding members.

The idea was, in the words of Robert Schuman, that sharing resources would lay “common foundations for economic development” and that vision ultimately grew into the EU we know today.

Yet, seventy years on, the politics of energy is once again a major challenge to European unity.

This time the issue is gas. Controlling surging prices and securing adequate supply are paramount concerns among member states. Last week the EU unveiled a draft policy package which seeks to address a significant cleavage which is emerging between a northern bloc – fronted by Germany – and a French-led group of southern states.

The first tension is over securing gas supply, which has seen member states’ interests turn inwards.

Brussels-based think tank Bruegel has outlined 13 ‘prominent’ bilateral or private gas supply deals made since the start of the crisis – all by individual member states. Meanwhile, only six agreements have between made between neighbour member states to share gas supplies should either one suffer a severe shortage – whereas the EU reckons over 40 such deals could be struck.

There is also disagreement on future infrastructure. Germany’s hope for a new ‘Midcat’ gas pipeline linking it to Spain (and its supplies from North Africa) was criticised by France for being neither an immediate nor sustainable solution. France, Spain and Portugal have now agreed to build a pipeline from Barcelona to Marseille instead.

In an attempt to reconcile these conflicting approaches, last week’s European Council conclusions agreed to formalise ‘solidarity’ measures to share gas with neighbours in emergencies. This includes setting standards on how quickly states must respond to requests to share supplies, and the terms on which they will be compensated.

The package also aims to create a common purchasing platform to meet around 15% of the EU’s total gas demand. Not only should this dampen inter-state tensions over procurement, but reduced competition on wholesale markets should in theory also drive down gas prices somewhat.

Which leads us to the second key tension – how to control wholesale gas prices which have trebled in a year and led to surging consumer bills.

This is where the greatest divisions lie, with both French President Macron and former Italian Prime Minister Draghi criticising Germany for acting selfishly in allocating over €200bn to shielding its consumers and businesses from higher energy costs. This is equivalent to over 7% of its GDP and accounts for almost half of all such spending in the EU.

Other member states, which lack comparable resources, deem, not unreasonably, that it amounts to an unfair state subsidy for German manufacturing, with a Czech official quipping that “Germany is an industry association pretending to be a state”.

It also has a negative impact on households elsewhere in the EU, as heavily subsidised energy costs in Germany push up consumer demand, which in turn risks driving up prices on wholesale markets. This undermines the notion of EU economic solidarity, with smaller states left more exposed by the self-interest of the most powerful, and is exacerbated by the fact that there is a growing disparity in electricity costs between EU countries, depending on how much they rely on gas to produce it. 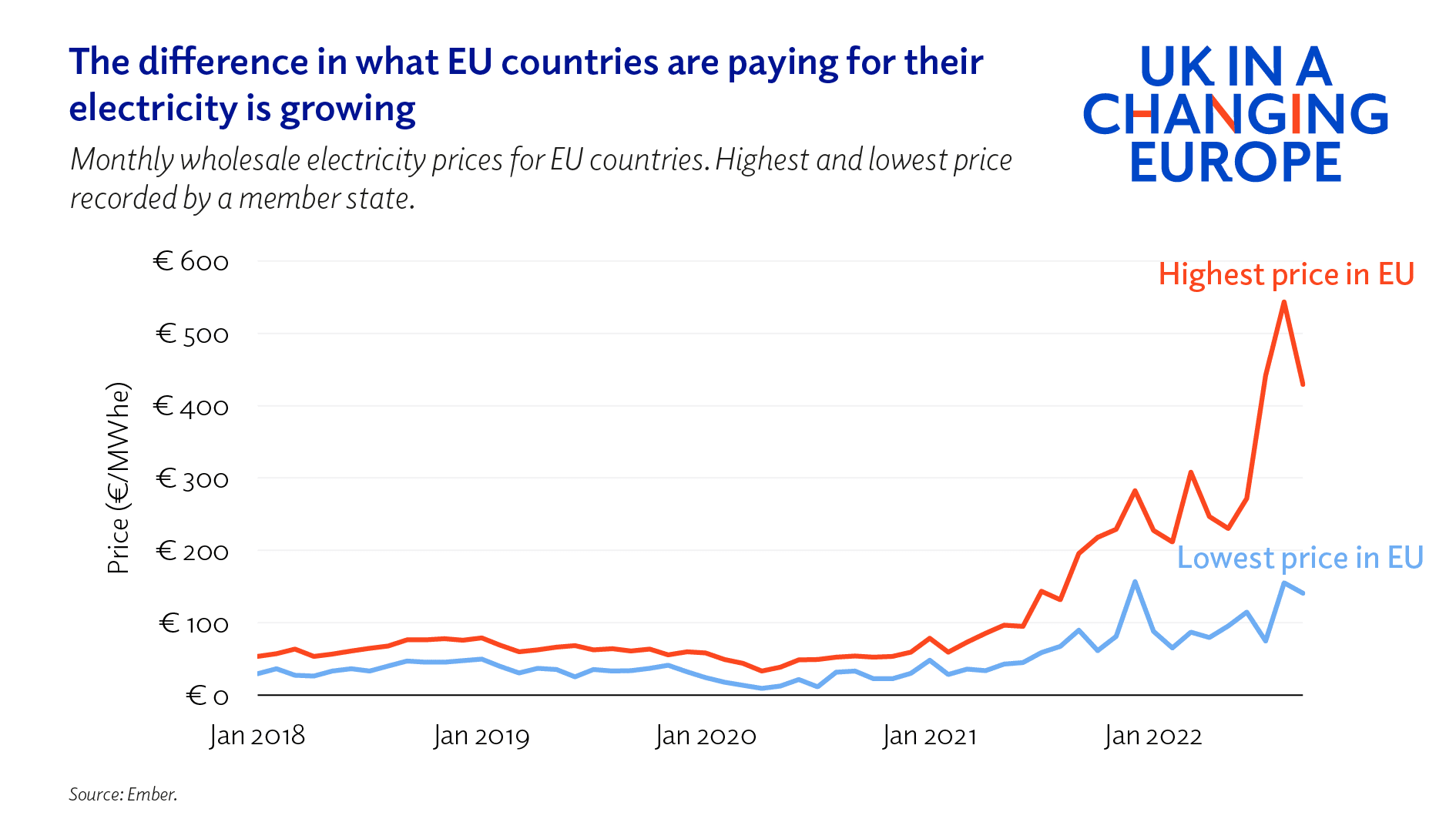 Hence many states have been pushing for an EU-wide cap on the price of gas imports to control prices – but months of talk are yet to produce a mutually agreeable solution.

The EU has been split between 15 – mostly southern and eastern – states supportive of a cap and 11 – mostly northern and central ones – which are against. The opponents question how the cap would be set and implemented and are concerned about the risk of being easily outbid for gas by others not subject to a price cap.

Instead, the EU has developed a stopgap proposal to limit surges in gas prices on its main benchmarking system. By next spring the plan is to have a new, separate price benchmark for liquid natural gas (which is less vulnerable to Russian price manipulation than pipeline gas).

This would provide greater stability and could lead to some reduction in prices, albeit less so than the other major solution on the table: an EU-wide ‘Iberian model’ (copying what Spain and Portugal are already doing) which would cap the price of gas-generated electricity, with member states paying the difference to producers.

Germany and others have consistently opposed it, arguing it disincentivises consumers from using less energy and suppliers from using cheaper energy sources, and is expensive to run long-term. However, in the early hours of last Friday the European Council agreed on ‘a temporary EU framework to cap the price of gas in electricity generation’.

The major caveat is that any proposal is subject to a ‘cost-benefit’ analysis and must meet several criteria including not increasing gas consumption. This makes it hard to envisage what a finalised proposal might look like, and one has to imagine it will be more limited in scope than its proponents would hope.

Politico characterised this as a ‘classic EU outcome’ where ‘everyone gets a little, no one gets everything’. But the problem remains that the scale of the crisis is one where classic EU compromises may not suffice.

The energy crisis means its existing gas price-setting mechanisms are not meeting citizens’ needs, and tweaking around the edges may not be enough unless global prices fall significantly.

Other solutions could be a solidarity mechanism to redistribute energy support funds from the wealthier members to poorer ones, the expansion of joint purchasing, or a more radical reform of energy markets to generate separate prices for electricity and gas.

Ultimately, unless measures are found which decisively bring down gas prices EU-wide, the risk is a growing disparity between member states which can afford to offer major discounts on consumer bills and those which cannot.

More members might also start unilaterally subsidising gas-powered electricity, ‘Iberian’ style, which creates a risk of them refusing to share that subsidised energy with neighbours.

This would mark a turn towards the kind of nationalistic and fragmented energy market which Schuman sought to guard against all those years ago.