Wilders’ rise is temporarily halted, but at what cost?

The anti-immigrant and anti-EU political entrepreneur Geert Wilders set the bar high for yesterday’s election in the Netherlands. At the start of the European election season, elections in France and Germany are still ahead, he aimed to ‘unleash a populist patriotic spring.’

It all turned out to be different. His Party for Freedom did not become the largest party. The party gained 20 seats which was better than the result in the previous election in 2012, but fell short of the party’s strongest showing of 24 seats in 2010.

One of the biggest winners of the election was the Green Left party. Its leader, the 31-year-old Jesse Klaver had been able to infuse a sense of optimism in the campaign. His message focused on sustainability, inclusion and an overall international outlook.

The Liberal Democratic D66 party mobilized similar issues that led to gains at the polls. Prime Minister Mark Rutte whose party lost, but did better than expected hailed the outcome as a victory for moderate forces. People of the Netherlands rejected what he coined the ‘wrong kind of populism’.

What do these results tell us about the prospects of populist parties like Wilders’ Party for Freedom? Is the Dutch move to moderate parties indicative of a turning of the populist tide? I would suggest most likely not. 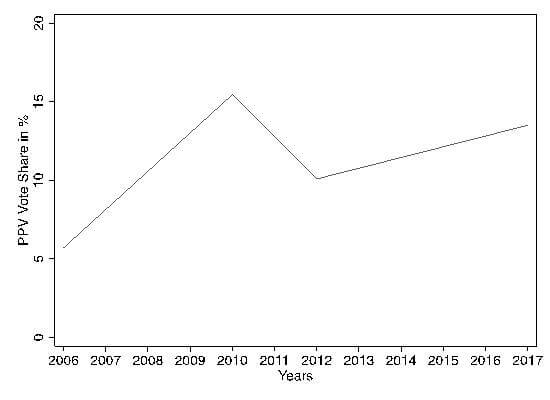 Political scientists have suggested that there are three ways to respond to challenger parties and political entrepreneurs like Geert Wilders. Mainstream parties can (a) ignore them, (b) confront them or (c) co-opt some of their positions. The electoral success of Geert Wilders over the last decade or so makes ignoring him very difficult.

This has also proven to be the experience of in many West European countries. So, how about a strategy of confrontation or co-opting issue positions? The gains of the Greens and D66 at first sight might suggest that a confrontational strategy might be successful, yet upon closer inspection this is perhaps not the case.

The biggest loser of yesterday’s election was the Dutch Labour party. The gains of the progressive voices in Dutch politics most likely came at the cost of the Social Democratic loss. Although we still have to wait for in-depth voter-level analysis, this might suggest that leftwing voters most to other left parties in the system, because of their disappointment with the large-scale cuts in and reduction of social welfare programs initiated by the coalition of the Labour Party and Liberal Conservative Party of Prime Minister Mark Rutte. 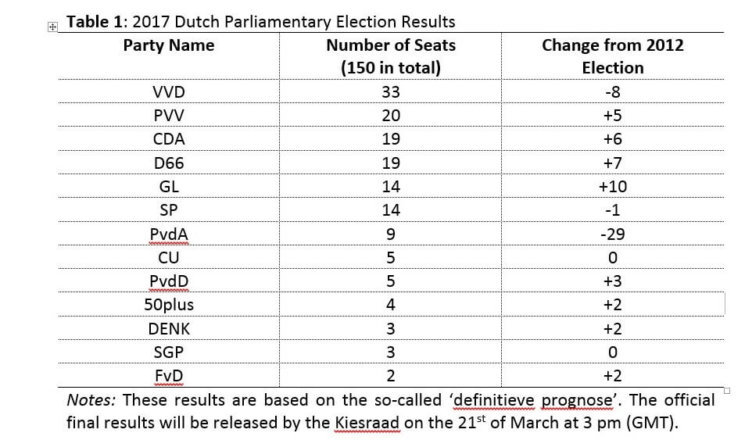 Exit polls suggest that Rutte did better than the polls expected partly because of a strong performing economy, but also because of his hard line on immigration and harsh tone in a recent diplomatic incident involving the Erdogan regime.

By mid-January, polling suggested that Wilders could become the leader of the largest party in Dutch parliament. Inspired by the Brexit and Trump win, Wilders pledged to make the Netherlands great again.

Yet, on the 23 January Prime Minister Mark Rutte in a unprecedented move placed an ad directed to all Dutch people in the big national newspapers. The tone of the ad was harsh. ‘Newcomers’ as the prime minister called them were told to comply with Dutch norms and values or ‘otherwise bugger off’.

This pandering towards Wilders’ constituency followed by an unusual harsh response to Turkish ministers aiming to campaign on Dutch soil ahead of the upcoming referendum on the powers of the Turkish president, could well have been the make and break it moment for Mark Rutte and Geert Wilders in this campaign.

This places us in a difficult predicament. Even though the populist patriotic revolt might have at least been temporarily halted, the question is at what cost? The Conservative Liberal party of Mark Rutte and to a lesser extent the Christian Democratic party have mainstreamed many of Wilders’ viewpoints.

Given that the election outcome has fragmented the Dutch political landscape even further and will most likely lead to a coalition involving at least four parties, the question is if Wilders will not gain as a result of all this in four years from now. Geert Wilders’ reaction to the election suggesting that he will pursue his rebellion against the establishment might suggest as much.

The likelihood that the threat of Wilders doing well in Dutch elections will not subside any time soon means the Dutch government has every reason to show British government officials the hard shoulder in the upcoming Brexit negotiations.

Creating a negative precedent for EU exit might turn out to be a very useful tool in attempting to stop Eurosceptic political entrepreneurs like Wilders in their tracks.

Catherine E. De Vries is Professor of Politics in the Department of Government at the University of Essex.