Will fishing sink a deal in the post-Brexit talks? 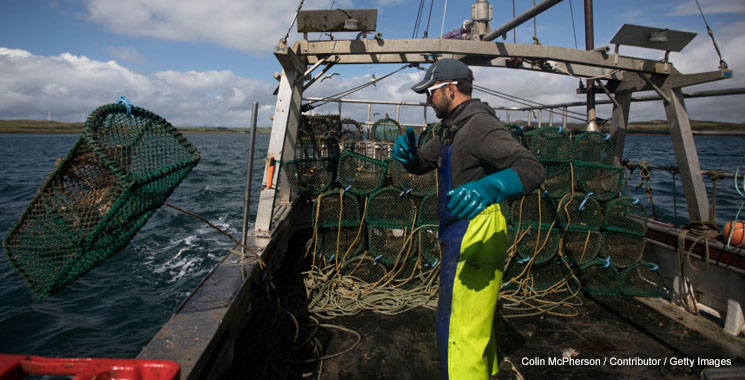 At the end of the month, Boris Johnson will meet Commission President Ursula von der Leyen. Fish needs to be the starter course.

Four rounds of negotiations, and many sessions devoted to fish have failed to break the deadlock.

The UK has tabled the draft of an agreement that does no more than assert that the UK is now an independent coastal state which will negotiate access for EU boats annually.

The EU is demanding a perpetuation of the status quo  – cementing the Common Fisheries Policy into their draft treaty.

Even Michel Barnier has described the EU position as “maximalist” – an adjective he also applied to the UK. With no deal on fish he warns, the EU will not contemplate a wider deal with the UK.

Fish is not an obvious candidate to sink the future relationship talks. Its economic significance is trivial in the UK – sea fishing accounts for around 0.12 per cent of GVA.

It employs just under 10,000 people – a number that doubles when fish processing is added. The UK is one of the bigger fishing nations of the EU. Only Spain and Denmark land more fish.

Moreover, fishers on both sides depend on each other’s markets – and for perishable goods like fish, ease of market access matters.

No trade deal could make it much harder to supply some of those markets as now. That seems to be a recipe for an agreement – an economically insignificant issue with a lot of common interests on access and trade.

But as our new report, Fisheries and Brexit, brings out, the political economy of fish is much more about politics than economics.

Fishing has a cultural significance, tied up in the UK’s self-image as a seafaring island nation. Many fishing communities have a pent up reserve of resentment against what they see as the unfairness of the UK’s terms of entry into the Common Market in 1973.

The slogan of “taking back control” resonated – giving the UK access to fish now caught by EU vessels. But those factors aren’t just at play on the UK side. French fishermen are already threatening blockades if the EU doesn’t protect its rights to fish in UK waters.

The Danes have fishers who want to retain their access too. There are eight member states with stakes in the outcome of the negotiations.

There are potentially difficult political tests for leaders on both sides of the Channel with a Presidential election in France and elections to the Scottish Parliament (and a potential launchpad for a second independence referendum if the SNP do well) in 2021.

Last week, Michel Barnier appealed for space for a deal to be done. If that space opens up where might a deal land, the UK will not give up its status as an independent coastal state – whatever its deal with the EU that is what it will be after the end of the transition.

The UK negotiators have made much of the importance of being recognised by the EU as a sovereign equal so this would be an easy concession for the EU to make.

But then the question is whether, as an independent coastal state, the UK is prepared to make any concessions to the EU. There are various dimensions that could take.

The first is to meet the EU complaints that annual negotiations are simply impossible given the number of shared fish stocks. The UK would not be overly compromising its independence by agreeing in principle to a more stable framework, with agreements that covered a number of years.

Second, while the EU could concede that it needs to move away from historic shares which reflect fishing patterns from previous decades and agree in principle that the long-run basis would be “zonal attachment” which is what the UK wants. But the UK could concede that it will phase in changes over time.

That would be a hard sell to fishers who are expecting huge uplifts straight away, but it would give more time for EU fishing communities to adjust, and time for the UK to work out what how it proposes to deal with additional quota (and ensure that it benefits UK fishing communities rather than get transferred into foreign hands which has happened to much of England’s quota in the past and is one of the major sources of resentment).

This would also give the UK government and its devolved counterparts time to work out their policies to help these coastal communities develop as fishing opportunities rise (and address some of their concerns on enforcement).

Finally, even though the fishing associations are clear that they want no linkage between trade and access, some at least in the industry (the shellfish fishers who have been hardest hit by the loss of export and restaurant markets from Covid), the UK should make clear that the fish deal is conditional on a satisfactory trade deal.

Fish is the UK’s strongest card in the negotiations with the EU.

The UK government needs to satisfy two groups with very different interests: the fishers whose expectations have been raised high by ministerial rhetoric about taking back control and are waiting for the redress of long-held grievances – and the rest of the British economy – manufacturing and services, which will take a bigger hit if the UK leaves the EU with no deal in place.

The risk is that both the UK and the EU have raised the stakes on fish and boxed themselves into corners that neither can escape. They both need to work a way out.

By Jill Rutter, senior research fellow at The UK in a Changing Europe. This piece was originally published by The Telegraph.