Will Poland revive or damage the EU and NATO? 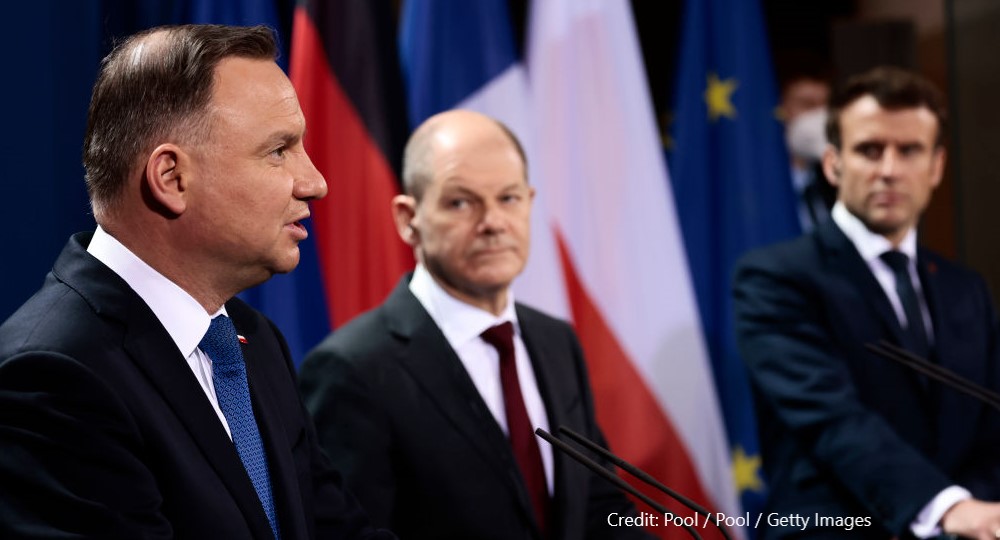 Putin united the EU and NATO: this seems the only good news at present. Close up, things are less certain than pundits claim. Perceptions of the Russian invasion of Ukraine diverge, between and within Western countries. Nor is it clear whether the unity generated by this war will make the EU and NATO more robust, thoughtful and democratic. Poland’s evolving relationship with Europe and America is a good test case, as ultimately, the EU and NATO need Poland in the battle to protect Ukraine.

Poland has undergone a profound metamorphosis since the Russian invasion of Ukraine. President Andrzej Duda, who once described the EU as a phantom community, has now firmly stated that EU membership is the country’s raison d’etat. Donald Trump is no longer the ruling party’s hero; the party is now praising Joe Biden’s lead of NATO.

Poland’s official policy towards refugees has also changed substantially. The Law and Justice Party (PiS) came to power by viciously attacking Germany’s open door policy; now, PiS is welcoming to Poland more refugees than Germany in 2015—and the numbers are still growing.

Not everything has changed for the better, unfortunately. Syrian and Afghan refugees are still pushed backed to Belarus in a heavy-handed manner. The Polish Constitutional Court has just declared certain provisions of the European Convention on Human Rights ‘unconstitutional.’

Public television continues to smear Poland’s European allies, particularly Germany. These television stations have continued their scandalously biased treatment of the political opposition at home. And despite vague promises, Poland’s judicial independence has not been restored.

Nobody is perfect, one may say, and the EU as well as NATO need Poland in a struggle to defend Ukraine. Warsaw proved more perceptive about Putin’s expansionist intentions than Rome or Berlin. Unlike some other NATO members, Poland has made sacrifices to increase its military spending over recent years. Poland represents a strategic buffer between Germany and an aggressive Russia.

An isolated and destabilized Poland would be easy prey for Putin, and so some might suggest the time has arrived to forget Poland’s illiberal excesses and let EU funds flow to Poland again without moralistic navel-gazing.

There would be some wisdom in such reasoning, but with five important qualifications: First, strategic consideration should not trump normative ones, because the two are intertwined. There is no European integration without abiding to common European laws. The single market cannot function properly without an independent judiciary. Ending energy dependence on Russia requires lifting environmental standards up, not pushing them down.

The same logic applies to NATO. Moral norms will not arrest Putin’s aggression, but without these norms, we could end up resembling Putin’s Russia.

Second, help should go to those who embrace democracy and cooperation and not to those who advocate despotism and walls. Viktor Orbán has for years enjoyed EU money without feeling obliged to follow the EU’s laws and norms. Sovereigntism à la Orbán has since spread across the continent, and it is threatening the very foundations of the European project.

The majority of Europe’s illiberal politicians do not want to exit the EU; they want to take it over and reduce it to the common market – and little else. No wonder Putin was so friendly with them. If Poland’s ruling party wants to be back at the heart of the EU and NATO it should renounce its intention to ‘make Budapest in Warsaw.’

Third, the EU and NATO should not limit their cooperation to governments alone, as exemplified in the case of Poland. Credit for welcoming Ukrainian refugees should primarily go to Poland’s mayors, NGOs and ordinary families. The Polish government has opened its borders to these refugees, but selectively. Ukrainians coming to Poland via Moldova, for instance, are treated less generously. Thus Polish civil society should be seen as an interlocutor.

This is especially true of those guarding the country’s democratic constitution, demonstrating against draconian anti-abortion laws, opposing discrimination of LGBT+ individuals, demanding stringent environmental policies, helping Syrian and Afghan refugees on Poland’s border with Belarus, and resisting ideological propaganda in the public media and schools. The current government in Warsaw can hardly claim to act on behalf of these courageous people.

Fourth, Poland’s current government is not a monolith, and it can well be encouraged to sacrifice ideology for cooperation against Putin. However, this cannot be done in an instrumental manner. The EU and its member states, such as Germany, should refrain from intervening in domestic political squabbles in Poland. It is for the Poles to choose their own government.

However, EU leaders when dealing with Poland, should stand by European law, defend European institutions and guard European norms and NATO should recognize Poland’s pivotal role in deterring possible aggression and in containing the spill-over from the mounting instability in the east.

Fifth, Poland’s assistance to Ukrainian refugees should be excluded from political considerations. No country is able to cope with two million refugees arriving practically overnight, and Poland has neither the experience nor the infrastructure to accommodate such a number of people, despite all good intentions. Refugees require food, accommodation, medical help, training and education.

In the long run, they will also require opportunities to work and assimilate with the local population on equal terms. Failure to provide all that is doomed to create social tensions. NGOs and city councils are best-suited to help Ukrainian mothers, children and the elderly currently in Poland, but they need tangible assistance from the EU and US.

The Russian invasion of Ukraine was a wake-up call for the EU and NATO. The challenge is to stand up to Putin while continuing to enforce liberal standards. It is hard to protect social budgets when there is pressure to increase the military expenditures. National security demands emergency rule, which can have detrimental implications for individual freedoms and democratic requirements. The media also cannot perform normally when reporting or discussing wars.

In this particular war, there is a temptation to suspend or even cancel policies aimed at arresting climate change. We need unity within the EU and NATO more than ever, but unity is not the aim in itself. The purpose is to make Europe safe, democratic, prosperous and environmentally sustainable. We need a coalition of the willing and the able to bring us closer to these noble aims.

I believe Poland will be part of this coalition, but those in Poland with anti-democratic agendas should be told: thanks, but no thanks. The same principle should apply to all adventurist and nativist politicians across the continent. We do not want to wake up in an illiberal Europe after stopping Putin.

By Jan Zielonka, Professor of European Politics at the University of Oxford and Venice, Ca Foscari. His latest book is Counter-revolution. Liberal Europe in Retreat, (Oxford University Press, 2018).