In light of recent polling suggesting a substantial shift in opinion on Brexit, Joris Frese, Juho Härkönen and Simon Hix examine the extent to which this can be explained through ‘voter replacement’ – the phenomenon of older, Brexit-supporting voters passing away and younger, anti-Brexit voters entering the electorate.

Has the British public changed its mind about Brexit? Recent opinion polls suggest that there has been a considerable shift in attitudes against Brexit, compared to the 52% to 48% split in the June 2016 referendum.

Figure 1 shows a time series of responses to a particular question, where every few weeks since August 2016 YouGov have asked a representative sample of the British public the question: ‘In hindsight, do you think Britain was right or wrong to vote to leave the European Union?’. 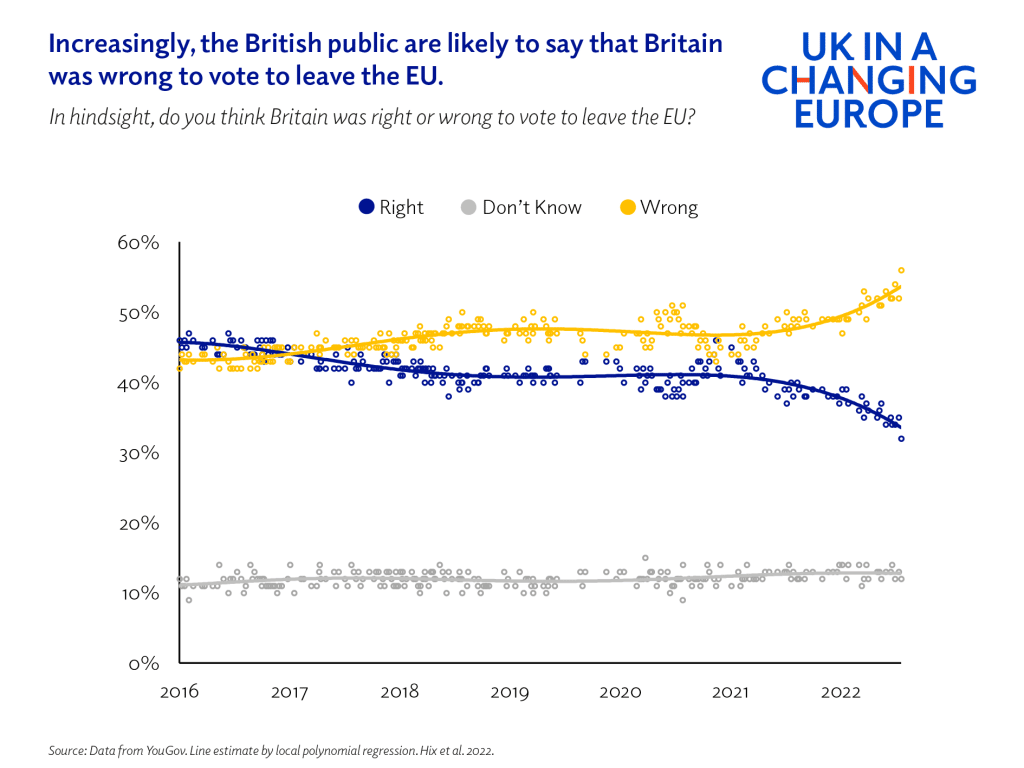 In early August 2016, about five weeks after the Brexit referendum, 46% of respondents said that Britain was right to leave the European Union (EU) while 42% thought the decision was wrong. In November 2022, in contrast, 56% said Brexit was wrong while only 32% said it was right. In other words, in just over six years there has been a decrease of 14 percentage points in the proportion who support Brexit and a corresponding increase of 14 percentage points in the proportion who oppose Brexit.

At face value, these numbers suggest that almost one-third of people who voted to leave the EU in 2016 have changed their mind. However, it is not possible to infer this from these aggregate numbers. In the June 2016 referendum there were strong age effects, in that older citizens were more likely to vote to leave the EU while younger citizens were more likely to vote to remain.  And, in the six years since Brexit, some older voters (who presumably continued to be more likely to support Brexit) have passed away, while new generations of younger voters (who presumably are more opposed to Brexit) have entered the electorate.

So, how much of the aggregate swing in public attitudes against Brexit is due to voter replacement (Brexit supporters dying out and Brexit opponents joining the electorate) as opposed to people changing their mind? As a first step towards answering this question, Figure 2 shows how different birth cohorts have answered that Brexit was the wrong decision across four waves of the YouGov data: in October 2016, October 2018, October 2020, and October 2022. 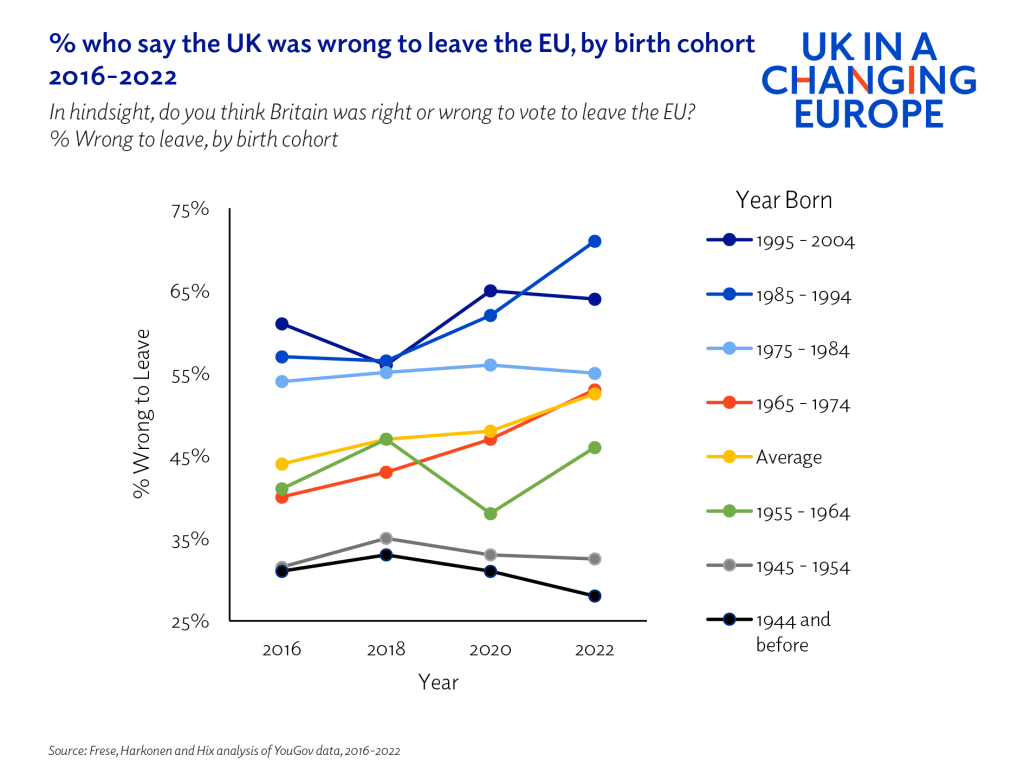 Within some birth cohorts (for example younger voters) sentiment has indeed shifted over time. In others, however, we see more stability. In particular, the oldest two cohorts – born in 1954 and before – continued to support Brexit in 2022 as they did right after the referendum.

The average opinion (the yellow line) has shifted more strongly than the opinions of most cohorts. This supports the voter replacement argument.  When the share of respondents from older, pro-Brexit cohorts declines and the share of younger ones that are critical of Brexit increases, change in the aggregate is possible even if no-one changes their mind.

To investigate this more formally, we apply a demographic decomposition to the change from 2016 to 2022 in the shares of respondents who told YouGov that Brexit was the wrong decision. The idea is to calculate how YouGov’s results would have changed if each birth cohort’s views had remained the same, but allowing the cohort distributions to vary as they did between the waves – i.e older voters to be replaced by younger voters.

The graph below shows the percentage in each birth cohort – with drops in those born before 1954, and increases in those born since 1995. By dividing this ‘compositional effect’ – that is, voter replacement – with the observed change, we can estimate the share of the change that results by older cohorts leaving and younger ones entering the YouGov panel. 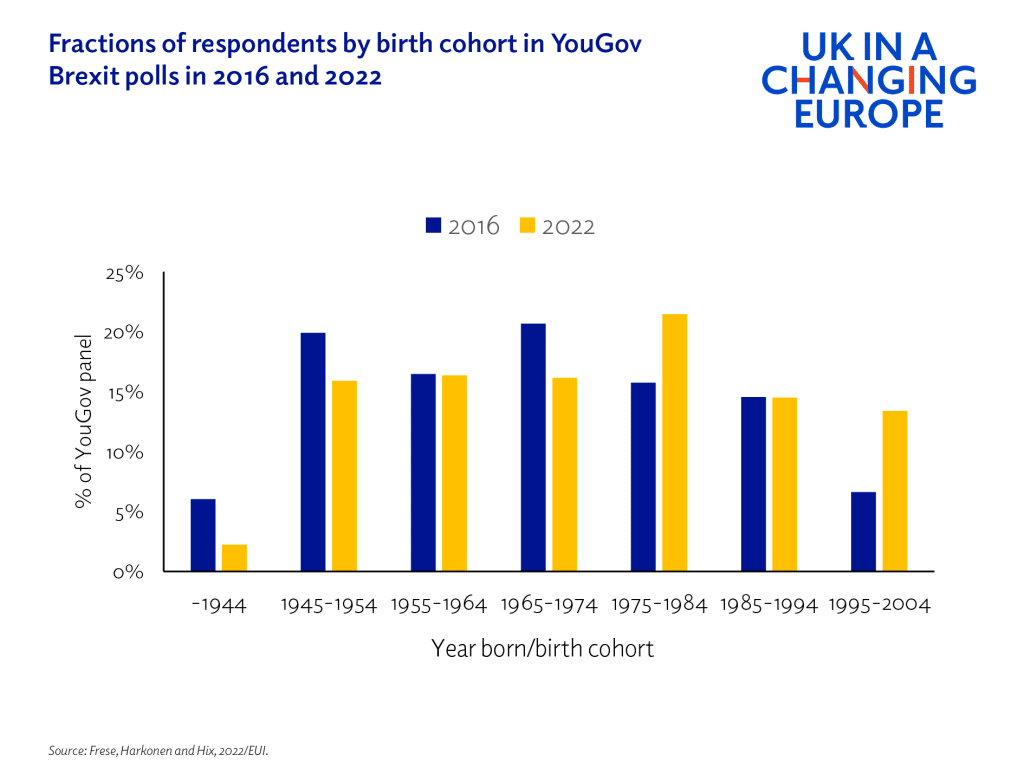 With this exercise, we estimate that about 35% of the aggregate decline in support for Brexit since 2016 is due to voter replacement. Thus, our results point to the importance of ‘demographic metabolism’ that replaces old cohorts with new ones. Considering how much the average view on Brexit has changed (a 14% shift against Brexit), it is remarkable that demography has played such a major role in this shifting opinion in just six years. The reason of course has to do with the large cohort differences in Brexit support.

Finally, to consider the political implications of these attitudes changes we also looked at how far Conservative and Labour supporters have changed their minds. Again, we find attitude changes in the oldest and youngest cohorts, but in drastically different directions between the two partisan camps. 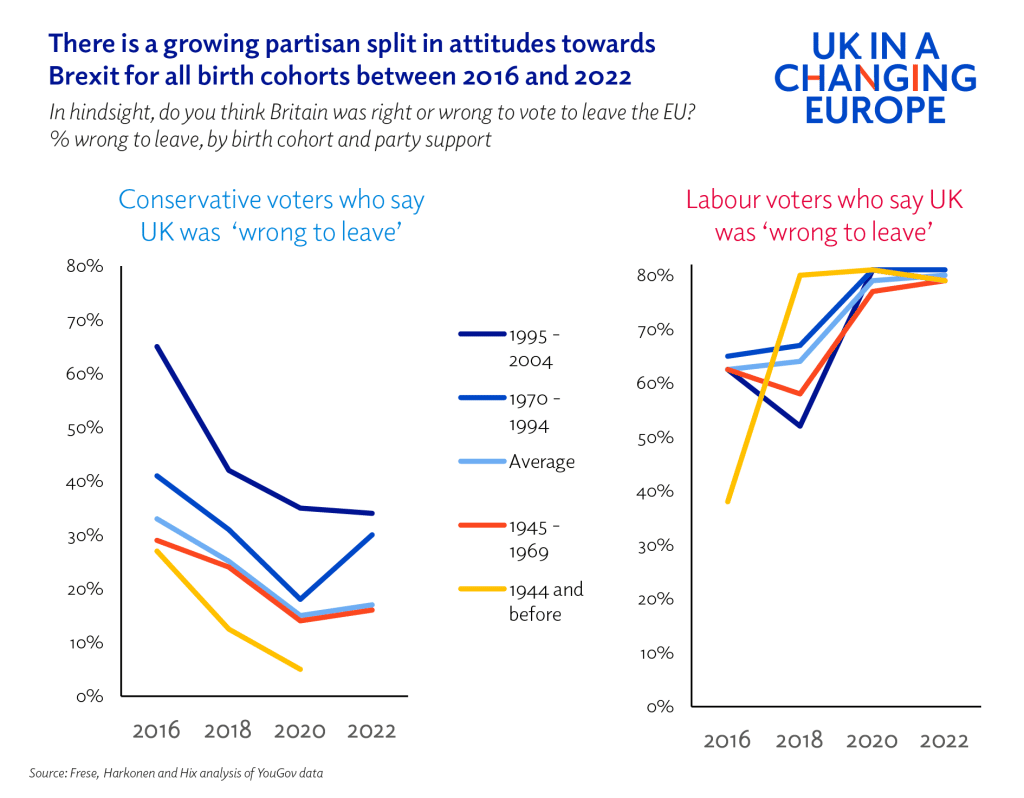 All Conservative supporting birth cohorts became more supportive of Brexit between 2016 and 2020, but support has fallen since then. The only outlier cohort in this pattern is the oldest birth cohort: not a single Conservative respondent born before 1945 thought Brexit was wrong in 2022!

Among Labour supporters, all birth cohorts have steadily decreased in their support for Brexit. This analysis also reveals that the between-cohort effect on Brexit support is most substantial among Conservative supporters, while for Labour supporters all cohorts have moved together. Overall, these patterns show a dramatic sorting effect – with a growing partisan split in attitudes towards Brexit for all birth cohorts between 2016 and 2022.

The British public appear to be turning against Brexit. But, as a result of the large birth cohort differences in support for Brexit, fewer people have in fact changed their mind about Brexit than it might seem. Older birth cohorts, who remain overwhelmingly supportive of Brexit, are gradually being replaced in the electorate by younger cohorts, who are overwhelmingly and increasingly opposed to Brexit. If these large birth cohort differences remain, support for Brexit will come under increasing pressure in the coming years.