Will the EU give enough ground on Brexit? history suggests we shouldn’t hold our breath 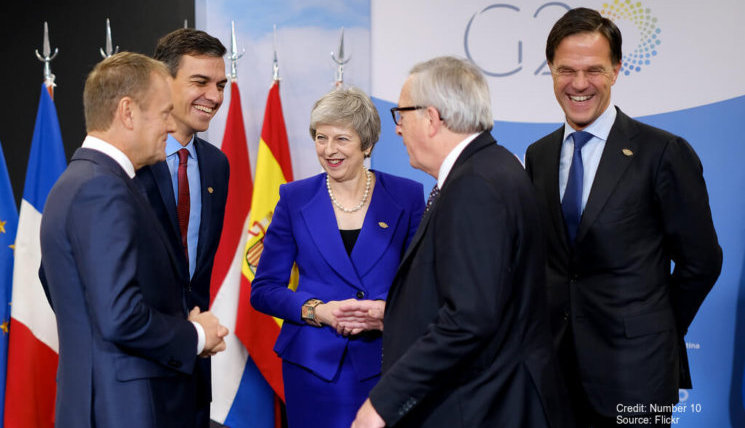 The EU has a track record of making last-minute changes to get deals approved. This has led some to assume that the same will be the case with Brexit.

Is this a reasonable assumption? To find out, it’s worth considering three notable occasions when the EU has attempted to assuage concerns expressed by or within member states in order to secure approval for a deal: the Maastricht Treaty, the Lisbon Treaty and the Comprehensive Economic and Trade Agreement (CETA) with Canada.

Each case suggests that there’s no automatic reason to think the EU wouldn’t be open to revisiting the Withdrawal Agreement to help get it through the House of Commons.

What they also suggest, however, is that any such changes will adhere to certain principles: the existing text will not be reopened and any additions must be compatible with it.

There is a significant difference between where the UK now finds itself and the historical examples discussed here. In those cases, the problem seemed relatively manageable. The Danish public rejected the Maastricht treaty by 51% to 49%, and the Irish said no to the Lisbon Treaty by 53% to 47%.

With CETA, almost three-quarters of lawmakers in the Walloon regional assembly in Belgium voted against the deal the first time. However, the regional president Paul Magnette made clear the ultimate intention was not to veto the agreement, and it eventually passed with the support of over 90% of Walloon MPs.

In stark contrast, the prime minister lost the meaningful vote on the Withdrawal Agreement by a whopping 230 votes.

A decisive number in her party seem intent on voting down the deal whatever changes might be made to it. Her first task, therefore, is to convince EU leaders that it is worth the effort to try to find a compromise.

Assuming she succeeds, what could the EU do? With Denmark in 1992, the member states agreed European Council conclusions – later deposited by each member state at the United Nations – reaffirming the inviolability of national citizenship and underlining that the euro and defence initiatives would not apply to Denmark.

Their task was made significantly easier by the fact that the Danes had produced a paper setting out the specific areas that needed addressing.

Similarly with Ireland in 2009, European Council conclusions – later translated into a protocol to the Lisbon Treaty – simply clarified that the treaty did not affect competences relating to taxation and Ireland’s military neutrality, and that each member state would continue to have a commissioner.

Again, they had a sense of what was needed. Following the no vote, the Commission ran a flash survey of public opinion to see why the treaty was rejected.

The results centred on a lack of understanding of the treaty itself (22%) and protecting Irish identity (12%). Military neutrality (6%), losing a commissioner (6%) and protecting the tax system (6%) were also concerns which, helpfully, implied actionable changes that could be made.

Finally, with Belgium and CETA, similar features appear. A legally binding ‘Joint Interpretive Statement’ was added to the trade agreement which emphasised the rights of member states and Canada to regulate their markets as they saw fit.

The most important of these, from the Belgian government, reiterated the right of each regional parliament to withhold consent, underlined concerns in some regions regarding the investment dispute mechanism in CETA and restated its understanding that the agreement would not affect EU rules on farming issues like GM crops.

In each case, the solutions adhered to the two criteria set out above: they did not reopen the original text of the treaty and the solutions were fully compatible with it. Rather than changing the substance of the agreements, each set of compromises was an exercise in drawing explicit boundaries and limiting the scope of the agreements.

Moreover, there is less momentum behind this renegotiation than there was then. Unlike the examples above, the Withdrawal Agreement hasn’t already been ratified elsewhere.

With Maastricht, Lisbon and CETA, altering the texts could have meant restarting the ratification process in dozens of countries and parliaments, hence why the member states and institutions bent over backwards not to have to do so. This suggests that, in fact, the EU has somewhat less incentive to make further concessions.

There are also risks for the UK in reopening the agreement. Doing so could bring up areas for negotiation the UK has so far managed to avoid – a risk that is little talked about in Westminster.

The Greek crisis in 2015 offers a cautionary tale. Greek prime minister Alexis Tsipras rejected the initial terms offered, which included the controversial abolition of the 30% VAT discount on the islands, only to sign up to conditions including the abolition of that discount under duress a few weeks later.

The prevailing view in Parliament is that reopening the Withdrawal Agreement would yield better terms, but this overlooks the fact that more demands may come from the EU, especially if there’s no deal.

Finally, it seems unrealistic to expect the EU to go further for the UK than it has for member states. It has not reopened treaty texts in the past, even though it has made other last-minute concessions to help get them ratified.

There is certainly some room for manoeuvre if these kinds of changes would bear fruit in the House of Commons, but a change as fundamental as rewriting or removing the backstop would be without recent precedent.

And, as we have seen in the negotiations themselves, precedents count for a lot when accommodating the varied and often conflicting interests of 27 different governments.

By Matt Bevington, policy researcher at The UK in a Changing Europe. This piece originally featured in The Telegraph.