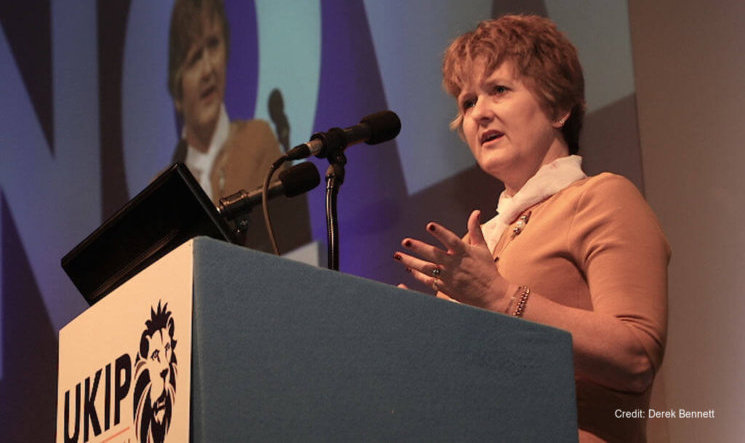 At a fringe UKIP event held in 2013, the UKIP MEP Godfrey Bloom told the crowd of supporters that ‘this place is full of sluts’.

While Nigel Farage, the leader of UKIP at the time, chastised Mr Bloom about this particular remark, he also suggested that UKIP’s success was largely about eschewing ‘political correctness’ and championing ‘free speech’.

In 2013 and 2014, female supporters of UKIP were interviewed as part of a larger project on women and the radical right in the UK.

While the populist radical right has often been seen a bastion of masculinity – parties created by men, for men, at the expense of women and women’s rights –  UKIP had done surprisingly well attracting women voters in the first half of the 2010s. In the 2015 general election, 12% of female voters cast their ballot for UKIP.

This number had significantly dropped by 2017, but understanding why women would be attracted to a political organization that had little interest changing the ‘blokeish’ and male dominated nature of the party is important for trying to assess the rise of the populist right in both the US and Western Europe.

For some of the women that were interviewed, their reasons for supporting UKIP were based on the idea that they were living in a post-feminist society.

There was a clear sense that British women had already achieved ‘so much’ and ‘come so far’ in terms of access to employment and education that political parties need not engage with explicitly ‘feminist’ issues or demand greater equality.

However, there was an important difference in the rights they felt had been afforded to British women (particularly white women from Christian or secular backgrounds), and the rights of Muslim women who they saw as victims of oppression.

They were concerned that Muslim women were being forced to wear burkas, were not allowed access to education or employment, and that Islam was a fundamentally patriarchal religion that silenced women’s voices. One participant summed this up in her interview:

Well I don’t like women wearing burkas… I find them very intimidating and I think it should be like France where they banned the burka because that doesn’t reflect very well on women.  I don’t care if the person thinks that wearing the burka thinks that that is liberating her from the eyes of men… To us it looks like repression and we don’t want to see any of our women in this country looking like they’re repressed.

This concern about the lack of agency of Muslim women, and the repressive nature of Islam was voiced by all the participants.

While a generous interpretation of this may be that the participants can be understood as being truly concerned about women’s rights, and are genuinely worried about systems of patriarchal oppression and their impact on marginal groups, there are several reasons that suggests a more cynical reading is needed.

There are some modes of religious expression that can be a source of oppression for women – few would argue, for example, that the interpretation of Islam in Saudi Arabia has extremely damaging consequences for the women who live there.

As an American, growing up in the south I was acutely aware that many of my friends from Southern Baptist families also experienced forms of sexism that seemed egregious to me, even as a child.

However, there are many religions that actively work to promote women’s rights and champion equality, so while some religions may be part of the problem for some groups of people, blaming religion, and Islam in particular, seems a rather reductive way to start to unravel women’s oppression.

It is curious that the women who support UKIP were not particularly worried about the fact that two women die every week as a result of intimate partner violence, a statistic that has not shifted in a decade.

They weren’t concerned about the 20% of British women who will experience sexual assault in their lifetime. They weren’t worried about reproductive rights or the persistence of wage inequality – but they were, extraordinarily and exclusively, interested in the rights of Muslim women.

Most of the participants in the study had social networks that mirrored their identities – white, older, lower-middle class women from suburban areas.

They hadn’t read texts that might have challenged their ideas about Muslim women being voiceless, or books that recognize the complexity of what wearing a burka means for Muslim women.

Rather, they relied on sources that confirmed their fears – tabloid newspapers that espoused the same kind of rhetoric about the Muslim ‘Other’; the messages in these papers remind them over and over again they should be scared of Islam.

Daily Mail headlines warn that the UK is being flooded by Muslim immigrants, that paint Islam as a violent religion, and use headlines that that we know fuels prejudice and hate.

Despite the suggestion from the women UKIP supporters that we are living in a post-feminist utopia, there is still much more that needs to be done and fears that Brexit will only increase existing inequalities must be taken seriously.

A report from the Trade Union Congress highlights concerns about the erosion of many of the gains that have been made in relation to equal pay legislation, maternity and paternity rights, and the impact on sex discrimination legislation, while the UK Law Society gives an example of how Brexit may leave victims of domestic violence at even more risk.

Understanding the various ways in which systems and structures reinforce misogyny and sexism are fundamentally important for creating a more equal society – but Islam is not the problem here and focusing in this confuses the real issues that are now confronting us as we head towards Brexit.

By Dr Erin Sanders-McDonagh, senior lecturer at the University of Kent.