This represents a substantial shift in voting behaviour by gender, with 2017 in particular representing a complete reversal of previous trends. 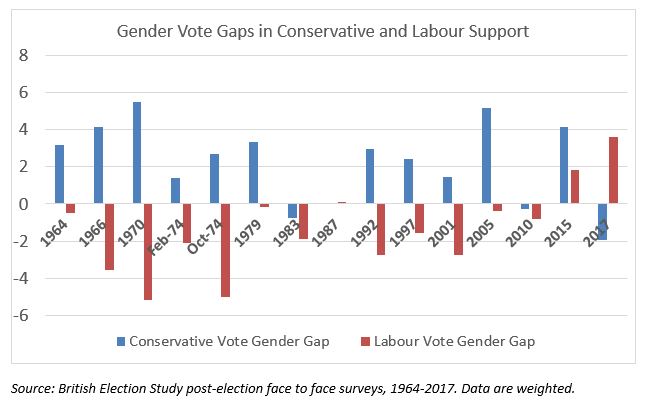 Analysis suggests that the gender gaps we witnessed in 2015 and 2017 were particularly driven by younger voters. 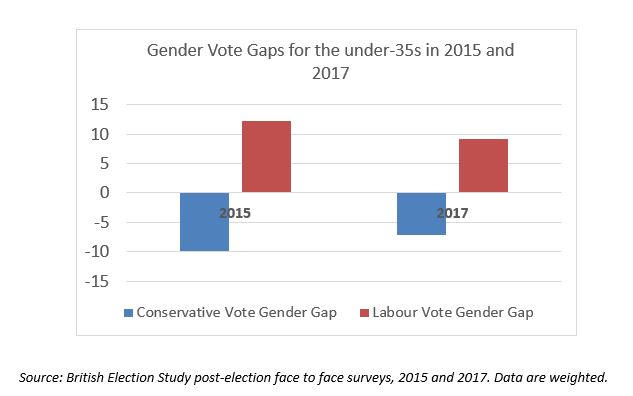 As a result, the lead the Conservatives have over Labour with men is very large – around 20 percentage points in most recent polls.

By contrast, the race is much tighter if we just look at women voters, where the Conservatives are often only ahead by a couple of percentage points – and are sometimes behind by the same margin.

The few polls which release data by gender and age also suggest that it is once again particularly young women lending their support to Labour.

Women have also been much more undecided in polling across the campaign than men. At the start of the election campaign, around one in five women were undecided about who to cast their vote for, compared to one in ten men.

This has dropped somewhat in most recent polling, although around 15% of women still say they are intending to vote but don’t yet know who for. The drop in undecideds amongst women seems to have been to Labour’s advantage.

The graph below shows men’s and women’s vote intention from YouGov polls across the campaign – YouGov is used here for illustrative purposes because they have run the highest number of polls, but the trends seen are very similar for other pollsters.

Although the Conservatives gained slightly amongst both men and women early in the campaign, Labour have gradually gained amongst women over the past month. They have also gained amongst men, but to a lesser extent.

A similar pattern was observed in 2017, where Labour gained especially amongst women as the campaign wore on.

This was also particularly concentrated amongst younger women in 2017: according to British Election Study Internet Panel data, Labour’s vote share was 30 percentage points higher amongst women under the age of 25 at the end of the campaign compared to the beginning.

The equivalent difference for women over 65 was five percentage points.

This dramatic shift across the campaign could have been because Labour’s anti-austerity platform at that election particularly appealed to women, who have consistently been found to be more against cuts to public spending, and more concerned about issues such as health and education, compared to men.

Moreover, although there was little difference between men and women in their overall support for Leave and Remain in 2016, men are more likely to care about the EU as an issue, which might have inclined them more to the Conservatives in 2017.

The collapse of Ukip certainly seemed to help the Conservatives amongst men in 2017. 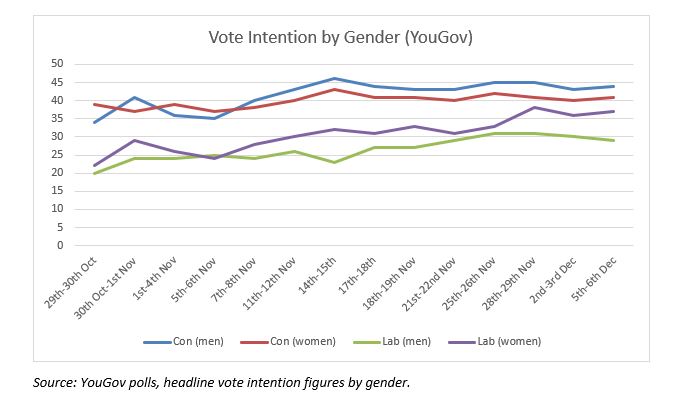 To a certain extent, similar dynamics are at play in this election.

On the other hand, the Conservatives have adopted a more ‘hard Brexit’ position compared to 2017, which might be particularly unattractive to women who are more concerned about the consequences of leaving the EU than men are.

This would indicate that the Conservatives will struggle to win back the women they lost in 2017, and that we will see similar gender differences in vote choice in 2019 as in the previous election.

Current polls still show that the Conservatives are on track for a majority in this election.

If they do so, this will be on the basis of men’s votes rather than women’s. If only women voted, we would instead be looking at a hung parliament.

Moreover, although women are often – as they are in this election – more undecided than men, they nevertheless turnout to vote at similar rates.

This suggests that who undecided women ultimately decide to vote for on Thursday could be consequential for the ultimate outcome.

By Dr Rosalind Shorrocks, Lecturer in Politics, University of Manchester.