Work, rest and the EU: is the EU really a champion of workers’ rights? 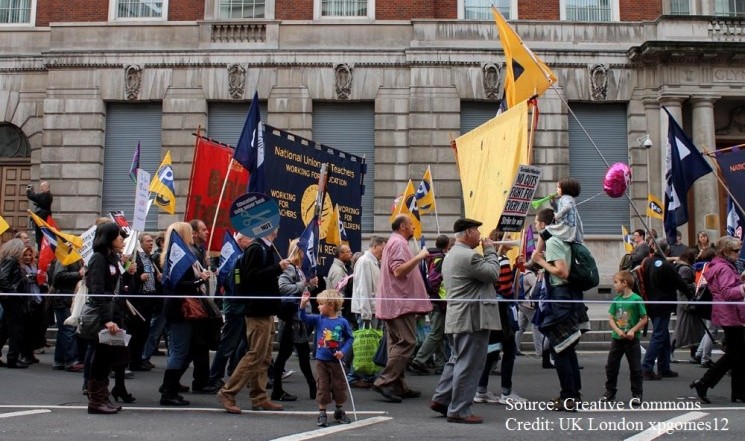 For the majority of trade unions, the EU has been a good thing for workers’ rights. This is their rallying cry to their members to come out to vote in the EU referendum. Frances O’Grady, TUC General Secretary, has said:

Leave the EU and lose your rights at work – that’s the message that even Leave campaigners like Priti Patel are now giving. But which rights would go – your right to paid holidays, your right to parental leave, maybe protections for pregnant workers? The EU guarantees all these rights and more, and it’s why Brexit is such a big risk for working people.

Even Jeremy Corbyn, the leader of the Labour party, has got behind the ‘remain’ campaign through promoting the cause of workers’ rights. And a recent letter by ten trade union leaders also encourages a vote to remain, for the same reasons. But are they right? Does the EU really offer such benefits?

The evolution of employment rights

It is certainly the case that the number and range of rights given to workers since 1957 has risen dramatically. When the original Treaty was drafted, workers were little more than a footnote: they were to benefit from the creation of the single market (more jobs, cheaper products), but they did not actually get specific employment rights. There was, however, one provision which proved significant: Article 157 TFEU required Member States to ensure the principle of equal pay for men and women.

By the early 1970s it became apparent that workers were disengaged from the EU project. The EU’s response was to give them more rights. This led to the enactment of key directives in fields as diverse as mass redundancies (the right to be informed and consulted), the transfer of undertakings (the right to maintain employment rights in, for example, outsourcing cases) and more rights for women at work. But it was not until Jacques Delors became president of the European Commission that there really was a flowering of EU employment rights in the late 1980s and early 1990s.

There were nearly 20 directives adopted on all aspects of health and safety , together with directives on rights for pregnant workers and, most controversially, the Working Time Directive. And, in the light of increased powers given to trade unions by the Maastricht Treaty in 1992, further directives focused on so-called ‘atypical’ workers, namely part-time workers, agency workers and fixed term workers.

So far, so positive from a trade union perspective. A less benign view might be that these rights are selective and partial; a patchwork quilt not a duvet. This is because the relationship between EU workers’ rights and national law is complex and this complexity is both the strength and weakness of the EU system.

The first reason for the complexity is competence – or power. The EU’s member states have not given the EU the power to legislate in all areas traditionally considered part of employment law. Most notably, the EU cannot legislate in the sensitive fields of pay, strikes or lockouts. So the minimum wage is a matter for UK law, not EU law. The regulation of strike action is also a matter of domestic law. So the recent Trade Union Act 2016 tightening up the balloting rules on strike action is entirely a matter for UK law. This is parliamentary sovereignty in action.

The second reason for the complexity is the diversity of the national systems of industrial relations. Traditionally, the UK is described as a system of collective laissez faire. This means that the regulation of working conditions was left to the trade unions and the employers (management and labour or, using EU jargon, ‘the social partners’), negotiating collective agreements.

The state has traditionally not intervened in labour relations, although this started to change in the Thatcher years and beyond. This is one of the reasons why the UK has struggled with the Working Time Directive. Unlike other parts of Continental Europe, the UK has not had a tradition of the government legislating on the maximum working week. So the Working Time Directive felt like an alien straitjacket.

But in recognition of the different systems of industrial relations in the EU, all social directives contain in-built flexibility. First, they set minimum standards. This means that EU law sets the floor, with states being free to improve on this floor if they wish. The UK has done just that: for example, the Working Time Directive prescribed 4 weeks paid annual leave. The coalition government raised this to 5.6 weeks paid leave.

The role of EU law as a floor of rights is significant. EU member states cannot legislate to reduce the protection below the EU level. This is one of the reasons why recent UK governments have been so active in reducing the protection given by unfair dismissal law. This is an area where the UK has a free hand to act, unconstrained by the limits imposed by EU law, a point noted by Adrian Beecroft in his report on employment law. Likewise, the decision to impose tribunal fees in July 2013 was taken unconstrained by EU law. Claims have since fallen by around 70%.

Second, flexibility is available through derogations (exceptions) and opt-outs. Most famously, the UK secured an opt-out from the 48 hour working week: workers can sign an agreement to say they waive their rights to work more than 48 hours a week. UK employers have taken full advantage of this. So, increasingly, have employers, particularly in the health service, in other EU countries.

The discussion so far suggests that the UK is a follower in the field of workers’ rights, not a leader. But this is not fair or true. UK equality law has influenced the drafting of more recent EU equality directives, particularly the concepts of direct and indirect discrimination. However, EU law has been responsible for expanding the range of ‘protected characteristics’. So it is due to EU law that discrimination on the grounds of sexual orientation, age, religion and belief has been prohibited.

This is now all incorporated into the UK’s Equality Act 2010, as have some of the Court of Justice’s more dynamic decisions. A vote to remain will preserve this. A vote to leave may not mean the end to equality protection, but a decision will have to be taken as to whether and how such protection might be preserved.

Catherine Barnard, Professor of EU law and employment law, University of Cambridge and senior fellow at The UK in a Changing Europe.