Would a Norway option break the Brexit stalemate? Here’s what new polling tells us 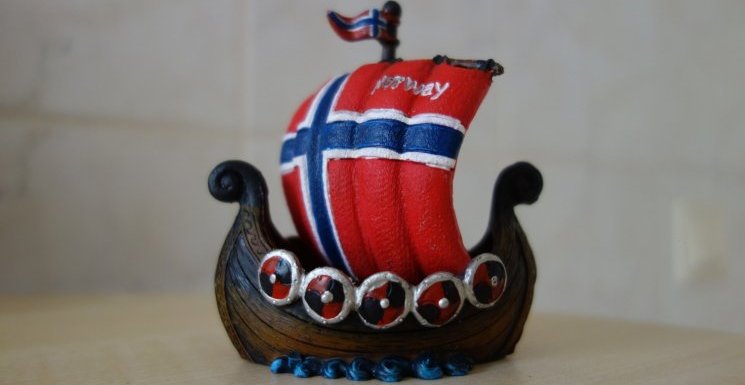 The Labour politician Jim Callaghan famously remarked to his colleagues in 1970 that a referendum on Europe might end up being “a little rubber life raft” into which they all might one day have to climb. Just five years later they did so, holding a vote that ensured the UK remained a member of what was then the EEC for more than four decades.

The decision taken two-and-a-half years ago in the 2016 referendum reversed the verdict the public arrived at back in 1975. But so controversial has it become, and so difficult to implement, that many are calling for what would be a third “people’s vote”.

Opposition to another referendum is intense – and not just among those desperate to see the UK leave the EU. Many who would, in their heart of hearts, prefer to remain in the EU worry that seeking to overturn the 2016 result would send a damaging message to “the people”.

For some, the so-called Norway-plus option, which would see the UK remain in the customs union and the single market, is now the safest life raft available. Prime Minister Theresa May has lost the meaningful vote, and it is increasingly clear that parliament, by hook or by crook, is going to do its damnedest to prevent a no-deal departure. We can therefore expect to hear a lot more in the coming days about Norway-plus – and about the EEA, EFTA, “cross-party consensus”, and a so-called “soft” (or “softer”) Brexit.

Whether any of this is feasible – at least in the time available and with May still prime minister – who knows? But what we do know is that, if it is to stand any chance of working, then advocates of the Norway-plus option are going to have to work very hard and very fast to persuade both the public and the members of Britain’s two biggest political parties that it’s something worth trying. How much chance do they have?

We asked all three groups of respondents how they would feel if Britain “ended up leaving the European Union but remaining in the single market and customs union – an arrangement that is sometimes called Norway-plus”. Their answers suggest the latter won’t necessarily be an easy sell – but that it shouldn’t be written off.

Let’s take party members first. Perhaps predictably, given how keen they are on a hard Brexit, the Tory grassroots are going to take a heck of a lot of persuading. Norway-plus would leave 23% of grassroots Tories feeling “disappointed”, 11% “angry” and a whopping 38% feeling “betrayed”.

And if you look at the three-quarters of Tory members who voted Leave back in 2016, those proportions rise to 21%, 13%, and an even more whopping 49%, respectively. 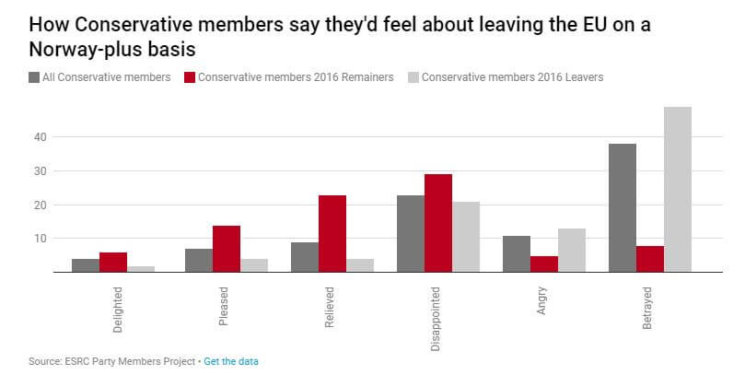 What about Labour members? Arguably their views should be taken seriously since Norway-plus will only really become an option if Labour MPs – the people Labour members help select – decide to support it. Our survey suggests that, if they do, then they might well be able to claim some grassroots sympathy if not outright support.

Recalling that some 82% of Labour’s rank and file said they’d feel “delighted”, “pleased” or “relieved” should the UK end up holding a second referendum and voting to remain in the EU, we shouldn’t expect them to be particularly gung-ho about Norway-plus since it would still mean the country leaving the European Union.

However, only 24% of Labour members said such a second-best outcome would make them feel disappointed, angry, or betrayed, compared to 52% who said they’d feel relatively positive. That said, only 3% chose “delighted” as opposed to 12% saying “pleased” and 37% “relieved”. 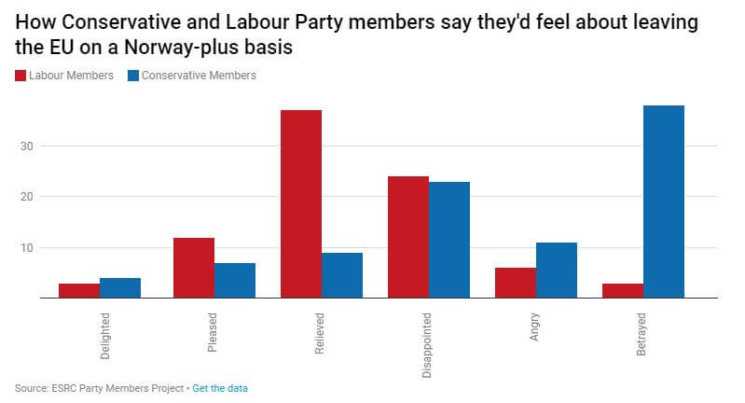 What about voters? Well, as one might expect, it rather depends on whether they voted Leave or Remain in 2016. Norway-plus would leave 43% of those who voted Remain feeling relatively positive (either delighted, pleased, or relieved) with 26% feeling relatively negative (disappointed, angry, or betrayed).

For Leavers, however, it’s a very different story: only 20% would feel positive about such an outcome, compared to 45% who would feel negative. 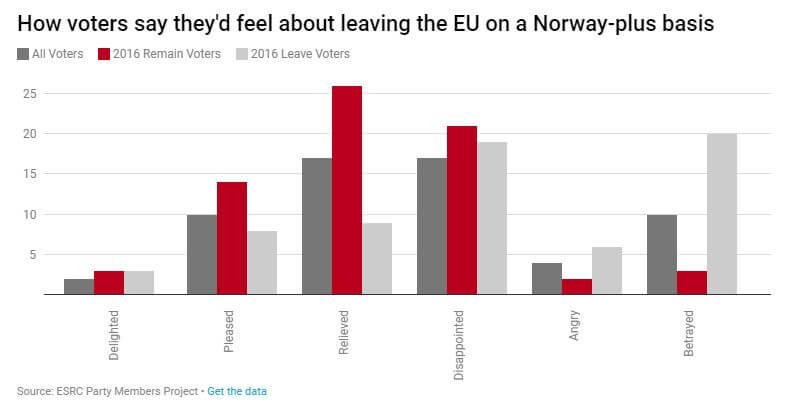 That said, and possibly very significantly, the scale of disappointment (19%), anger (6%), and betrayal (20%) that Leave voters would feel in the event of a Norway-plus outcome comes nowhere near that which would be felt by paid-up Tory members.

Nor, interestingly, would the disappointment (21%), anger (5%), and betrayal (17%) that would be felt by Tory voters rather than Tory members.

For their part, Labour voters, like Labour members, could probably live with Norway-plus. True, only 40% said they’d feel delighted, pleased, or relieved. But that’s considerably more than the 26% who picked disappointed, angry, or betrayed.

And, if we return, finally, to look at voters as a whole – this time irrespective of whether they voted Leave or Remain, Tory or Labour – then those who advocate Norway-plus might have at least some cause for optimism.

Fewer than a third overall expressed negative feelings (17% disappointed, 4% angry, and 10% betrayed). And although that was more than the quarter or so of voters who expressed positive feelings (2% delighted, 10% pleased, and 17% relieved), we should note that some 16% of voters said they “wouldn’t mind either way” while some 21% said they didn’t know how they’d feel.

In other words, it looks as if possibly nearly two-thirds of voters, and almost certainly a majority of them, could probably live with Norway-plus. But before its advocates get too excited, they need to heed what may be one enormous, crucial caveat.

Our survey noted that Norway-plus involved staying in the customs union and the single market. However, it did not remind voters that the latter would mean continuing to allow EU citizens the unfettered right to live and work in the UK.

Were it to be made clear to the public that Norway-plus did not mean they could “take back control” of Britain’s borders, their reaction might well be very, very different.

By Tim Bale, Professor of Politics, Queen Mary University of London. This article is republished from The Conversation under a Creative Commons license. Read the original article.