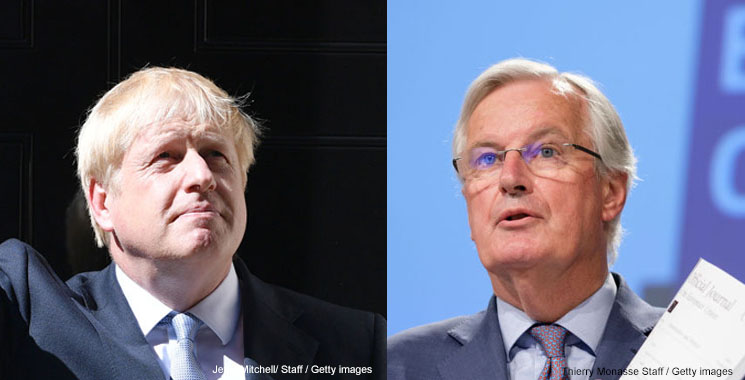 The negotiations between the UK government and the European Union make it quite clear that neither Boris Johnson nor Michel Barnier would buy a used car from the other on trust.

That’s not because they differ about whether the driver’s wheel should be on the right or the left. It is because there is mutual distrust, albeit for different reasons.

The Prime Minister doesn’t want the guarantee that Barnier is offering for enforcing any agreement about the UK’s future trade relations that they must meet an autumn deadline in order to avoid having no deal. This is because the EU would like any guarantee with the UK to be settled by EU law.

Barnier wants an enforceable guarantee because he does not trust Boris Johnson to keep his word. In order to get Brexit done, Johnson signed a Withdrawal Agreement that promised a significant customs barrier between Great Britain and Northern Ireland.

The normal thing to do when buying a used car is to ask the salesperson if there is a guarantee if its condition is not as promised. No guarantee means no deal.

By contrast, the normal thing in reaching a political agreement with a group of countries is to treat their commitments with a light touch, because there is no guarantee that the terms can be enforced.

The agreement that the UK and EU teams are currently negotiating is intended to cover a substantial number of commitments.

These could include the rights of EU and British citizens living in each other’s jurisdiction, tariffs, state aid, competition and the protection of workers’ rights and the environment.

As with any set of regulations, especially when they are stated in both French and English, issues can be expected to arise about how each partner implements the agreement.

The potential for disagreement is high, because the purpose of Brexit, as far as Downing Street is concerned, is to allow the UK to depart from EU policies and rules.

In discussions with the EU, British negotiators say new standards will be as high or higher than EU standards.

In discussions with Conservative MPs, the emphasis is on Britain differing from EU regulations in ways that give it a competitive advantage.

How British standards affecting trade will differ from the EU in practice is unclear, because the UK government has yet to spell them out.

This is not so much a Machiavellian strategy of hiding a well-prepared plan of action, as it is a sign of the UK government not yet having decided what specific measures will be changed to give substance to the Brexit rhetoric of ‘taking back control.’

To Europeans who believe in a social market rather than in an unregulated free market this signals that the UK might engage in social dumping, seeking to boost exports by adopting lower standards than its EU competitors.

Before buying an agreement with a Prime Minister with a used-car salesman’s reputation, Michel Barnier wants a guarantee that can be enforced. What he doesn’t want is what is implicit in the rhetoric of British negotiators: enforcement provisions that the UK can slip out of.

The starting point for enforcement puts the two sides in a position of political distancing. The EU would like enforcement by the ECJ whereas the UK government veto this as inconsistent with regaining sovereignty.

Consultation is accepted in principle by both sides. This can reveal whether a complaint is due to a misunderstanding that can be resolved by discussion or whether there is a substantive disagreement about what obligations their political agreement imposes.

There is recognition in principle of the need for arbitration when disagreements arise about the rules governing future UK-EU resolutions.

Since neither Britain nor the EU is willing to let the other’s courts having the final say, a special arbitration tribunal will be required to which each side can nominate one judge and they can agree a tie-breaking third judge.

The first point of disagreement is about the scope of arbitration: the EU wants it to cover all points in a single general-purpose agreement, while the UK wants it to leave some matters free of binding arbitration.

The disagreement could be resolved by narrowing the scope of the agreement by dropping those issues that the UK government wants to leave free of binding arbitration. Narrowing would be welcomed by hard core Brexiters and acceptable to the EU because, by default, all the remaining topics would be subject to arbitration.

The biggest dispute is about what rules an arbitration panel should follow. The EU does not want any terms of the agreement to be dismissed as non-binding if they contradict a hastily adopted Act of Parliament. It wants the arbitration panel to refer the interpretation of disputes to the ECJ.

While this is logical from a Brussels perspective, the chief British negotiator, David Frost, has stated that the superiority of EU to British laws would be contrary to ‘the fundamentals of what it means to be an independent country’.

To maximize the enforcement of the agreement, EU negotiators are insistent that if any arbitration finds any one condition violated, then the offended side can unilaterally suspend the whole agreement.

The British position is that this would be disproportionate punishment. But that is just the point. If the UK government showed it was untrustworthy, the EU would be glad to be quit of further disputes by abruptly cancelling the UK’s favoured access to EU markets and leaving Britain with no deal.

The effect would be relatively small for the EU. However, this would affect not only British sellers of used and new cars but also all engaged in EU trade, from the Conservative red-wall constituencies in the north of England to the City of London.

By Richard Rose, Professor of Public Policy at the University of Strathclyde. His newest book is: How Referendums Challenge European Democracy: Brexit and Beyond.